Honda CRV to Get Expensive

Honda Siel Cars Limited plans to increase the price of Honda CRV by 30 percent from May 2009. It also intends to increase the price of its other models in its product portfolio. "Devaluation of rupee is impacting our business, because a significant portion of our components are imported from Japan and Thailand. This impact is about 30-35 per cent in case of CR-V," Honda Siel Cars India (HSCI) President and CEO Masahiro Takedagawa said. "We will increase the prices of CR-V in May and it will be about 30 per cent, otherwise we will make loss," he added. 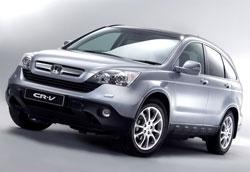 Takedagawa also stated that the prices of completely knocked down units have been seriously hit and there has been an increase of nearly 9-10 percent in the import prices. However, the price increase will not be completely passed on to the customers. This means that prices of Accord, City and Civic may not witness high increase in the prices. CRV is imported as completely built unit in India which attracts heavy import duty as well.