Honda will launch the much-awaited CBR650F sport tourer in the Indian market tomorrow (August 3, 2015). The company has already begun accepting pre-booking orders at Rs. 50,000. The Honda CBR650F will be imported to India via CKD (complete knock down) route, and then assembled at the company’s Manesar plant with 5% of localization-level.

The Honda CBR650F derives its power from a 649cc, four-cylinder, liquid-cooled in-line engine that develops a maximum power of 87bhp at 11,000rpm and 63Nm of torque at 8,000rpm. This powertrain is paired with a 6-speed transmission that helps the bike attain 0-100kmph in 4 seconds. It offers a top speed of 225kmph. Based on a twin-spar steel frame, the CBR650F comes equipped with the 320mm twin-piston caliper front disc brakes and 240mm single-piston caliper rear disc brakes. It also gets the 41mm telescopic fork up front and a swingarm monoshock strut rear suspension system. 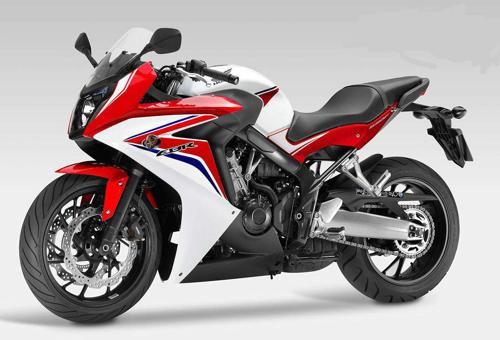 Talking about dimensions, the Honda CBR650F measures 2,110mm in length, 755mm in width and 1,145mm in height. It has a wheelbase of 1,450mm. Coming to the features, the bike comes equipped with a digital speedometer with two tripmeters, single piece headlight cluster, chiseled fairing, pronounced fuel tank, a single seat and, ABS (anti-lock braking system), etc.

Upon its launch, the Honda CBR650F will rival the Kawasaki Z800, Ducati Monster 795, Triumph Street Triple, Hyosung GT650R, Kawasaki Ninja 650 and Benelli TNT 600i. It is likely to be priced around Rs. 8 lakh (ex-showroom).

Fiat Abarth 595 Competizione to be launched in India tomorrow

GM announces the launch of new Chevrolet Cruze in Thailand