The name Passion from Hero MotoCorp has been synonymous to an everyday bike commuter. The more than a decade old bike has been one of the top selling 100 cc bike in the country. The Indian bike-maker in an attempt to appeal to the younger lot has unveiled an adventure version of its regular commuter bike. 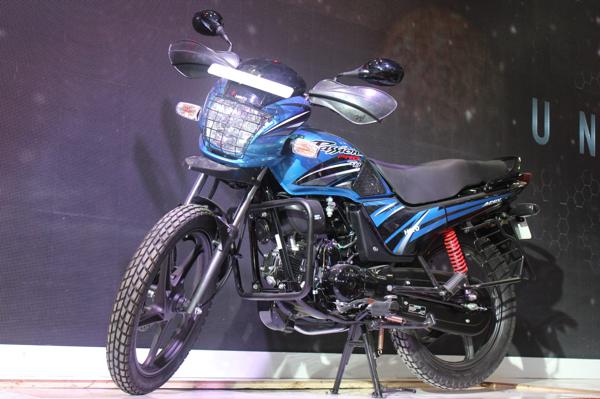 The Hero MotoCorp Passion Pro TR is powered by 97.2 cc air cooled engine that has been mated to the existing 4 speed gearbox. The four stroke, single cylinder engine generates about 7.7 bhp of power with 8.04 Nm of torque. The factors that makes it different from a regular version is the presence of cross braced studier handlebars, high mounted front fenders, headlight grill, hugger front fender, bash plate for engine and fuel tank pads. The Passion Pro TR also gets on-off roader tyres that work perfectly well under different circumstances. Overall, the design carries an aggressive stance, unlike the regular version that looks subtle and smart. As per sources, the bike shall be available in new interesting shades and graphics. The front wheel gets telescopic hydraulic shock absorbers, whereas the rear gets a swing arm with 5 step adjustable hydraulic shock absorber for a comfortable ride.

The bike is blessed with a 12.8 Litre capacity fuel tank that ensures you head out on long trips without needing frequent stops at the gas station. The bike stands tall at 1085 mm for that tourer stance, length of the bike measures at 1980 mm and width reads 840 mm. Moreover, the bike weighs a decent 119 kgs, thereby making it ideal to be ridden under different circumstances.