Gautam Singhania, an avid racing car enthusiast and founding Chairman of the Super Car Club, is representing the country at Lamborghini's 50th anniversary celebrations under way in Italy. Automobili Lamborghini, the iconic Italian super sports car maker, is celebrating its golden jubilee year in the automotive industry and kicked off the ‘Lamborghini 50th Anniversary Grand Tour’ on May 7, 2013. The festivities would end on May 11. 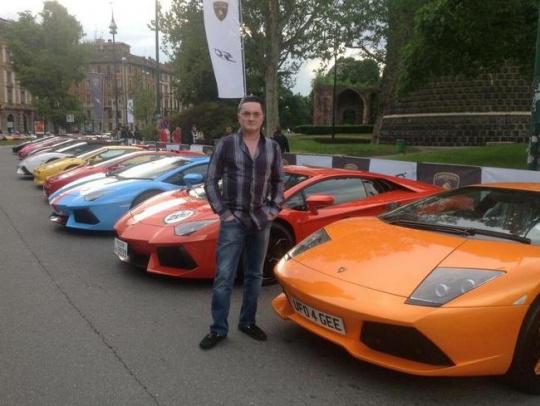 The company has invited global Lamborghini owners and dealers to take part in the Lamborghini 50th Anniversary Grand Tour. The event features one of the biggest and greatest rally of Lamborghini vehicles, and many vintage and contemporary 'Raging Bulls' have taken part. The Lamborghinis would cover over 1200 km of Italy's streets and covering several historic and beautiful cities along the way.

The grand tour kicked off on May 7, with Lamborghini sports car owners from all over the world assembling in Milan, which is the country's capital of fashion and design. The contingent of Raging Bulls left Milan on May 8, for Forte dei Marmi, an world-class resort located on the Tyrhennian coast. Over the next two days, the caravan travelled Rome, Bologna, Orvieto and Emilia-Romagna picturesque cities. The tour would end on May 11 at the Lamborghini's legendary manufacturing facility in Sant’Agata Bolognese, Italy.

Gautam Singhania, the Chairman and Managing Director (MD) of Raymond Limited, was on cloud nine and overjoyed, being India's representative at the Lamborghini 50th Anniversary Grand Tour. Expressing his delight, Singhania was quoted as saying, “It’s an honour and privilege to be part Lamborghini’s 50th Anniversary Grand Tour and be the only representative from India. Lamborghini is one of the leading names in auto engineering and respected for its top-of-the-class technology. It has been a great and enthralling experience driving a Lamborghini, be it on roads or tracks. I look forward to exciting time at this grand tour.”

Speaking his mind on the company's choice, Pavan Shetty, Head of Operations, Lamborghini's India arm, said, “We are delighted to have Mr. Singhania as a part of the celebrations. He is a renowned industrialist and has immense passion and zeal for super cars. We are excited to have him as a part of the Lamborghini 50th Anniversary Grand Tour and hope he will have a unique, memorable experience there.”