Ford India Private Limited (FIPL), a completely owned subsidiary of the multinational American car maker Ford Motor Co., has officially apologised for its new ad campaign that has been dubbed obscene and provocative by the media. As per reports, the company's ad portrayed three scantily clad women gagged and stuffed in the trunk of Ford Figo model. 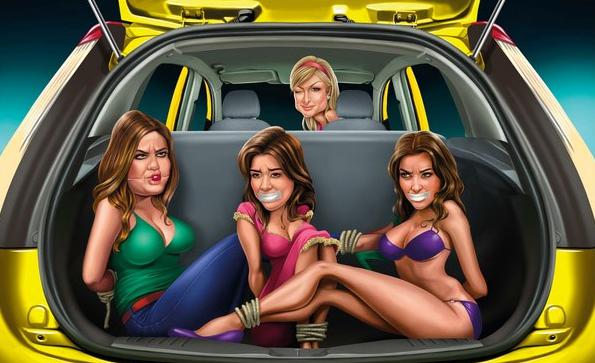 The outrageous Ford ad featured a caricature of Silvio Berlusconi, the former Italian Prime Minister, waving a peace sign while driving the Ford Figo. Further, in the passenger seats there are three barely clad women sitting gagged, bound and stuffed in the car's trunk. The ad attracted much too ridicule from the media and sensitive views across the country. As per a report by the Huffington Post, the Ford ad campaign's other version shows Formula 1 legend Michael Schumacher hauling Fernando Alonso, Sebastian Vettel and Lewis Hamilton. Similarly, another ad depicts socialite Paris Hilton kidnapping the three Kardashian sisters- Kim, Khloe and Kourtney.

Apologising in a press statement, the ad firm expressed repentance over the new tasteless ad campaign posters and affirmed that they should have never been made in the first place. WPP, parent group of the advertisement firm, said, “We deeply regret the publishing of posters that were distasteful and contrary to the standards of professionalism and decency within WPP Group. These were never intended for paid publication and should never have been created, let alone uploaded to the internet.”

As reported by The WSJ, Ford also expressed regret and in a statement said, they “deeply regret this incident and agree with our agency partners that it should have never happened.” The ad posters have now been removed from the company's official website.