Ford Motors, the well known American auto maker, has introduced an All Terrain Edition of its flagship Sports Utility Vehicle (SUV), Endeavour in the Indian auto market. Interestingly, the auto maker did not created much buzz before the launch of its next generation model of Endeavour, and thus the industry experts were expecting the model to witness the daylight somewhere in 2014. However, it has been now brought to Indian shores now with a price tag of Rs. 19.1 lakhs (ex-showroom, New Delhi). 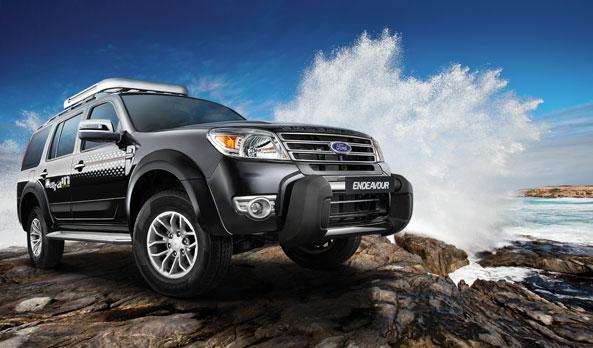 The new model has been provided with few cosmetic changes and some technical upgrades. The cosmetic changes in the recently introduced model include a new front grille, chorme inserts, body decals, illuminated scuff plates and chrome plated 16-inch alloy wheels, among others. With all these exterior modifications, the model now looks refreshing and reflects an aggressive styling. Coming to the interiors of new Endeavour, the SUV has been provided with two-tone beige colour combination and a new one touch console for power windows, among others. Another key USP of the new model is its cutting edge GPS enabled Satellite Navigation system, which features a touch sensitive display.

Besides enhancing looks of the model, it has been provided with a number of features, which add to the unmatched experience of drivers. Advancements like reverse parking camera, new electric shift and steering mounted audio controls are a few highlights of the same. However, technical specification of the model are kept same with the 3.0 litre diesel engine, churning out a maximum power of 154 bhp at 3200 rpm with peak torque of 380 Nm at a low 2500 rpm.

Prior to this All Terrain Edition model, Ford India introduced a reworked model of Endeavour in 2009, which was then well appreciated by the domestic buyers. At that time, the SUV was provided with cosmetic changes, powered by a 3.0 litre engine, mated to an automatic gearbox.