Ford India, an arm of American auto maker, has finally launched its much awaited compact Sports Utility Vehicle (SUV), EcoSport in the domestic auto market at an aggressive base price of Rs. 5.59 lakh (ex-showroom, New Delhi). Reportedly, the diesel variant of the SUV has been offered with a price tag of Rs. 6.69 lakh. As EcoSport has been launched in the Indian auto market, it will now pose a stiff competition to the segment leader Mahindra Quanto, Maruti Suzuki Ertiga and Renault Duster, among others. 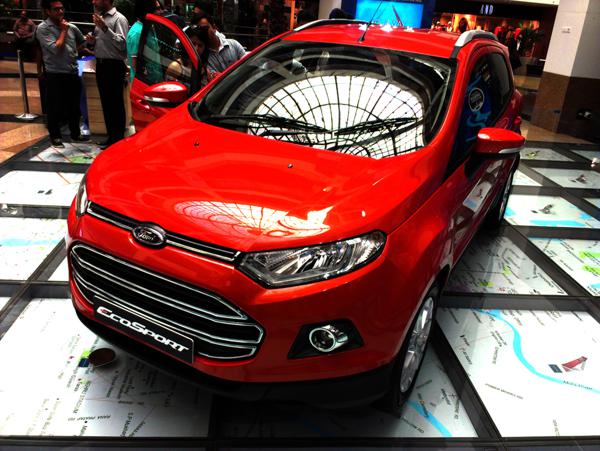 Industry experts are of a view that with its new model, the American auto maker has also targeted the dominance of premium hatchbacks like Hyundai i20 and entry level compact sedans like Maruti Suzuki Swift DZire and Honda Amaze. It must be noted that the American auto maker has already maintained an inventory of 5,000 units as it was expecting that the orders and deliveries will start from the launch day itself. Expressing his views at the launch ceremony, the Managing Director of Ford India, Joginder Singh was quoted as saying, “We expect the EcoSport to be a game changer for Ford India. It will set a new benchmark in the Indian automotive space. Based on the One Ford global platform, the product is tuned to the needs of Indian consumers.”

The recently introduced model will be produced at Ford India's Chennai unit, and the auto maker is planning to ship its EcoSport to more than 40 countries, including South Africa, Australia, New Zealand, Taiwan and several parts of Europe. It must be noted that the company invested US $ 142 million (close to Rs. 838 crore) to manufacture the EcoSport at its production unit in Chennai. In order to lure the Indian audience, the model has been offered in four trims, eight colour and three engine options.

Being a part of One Ford plan, EcoSport has been designed on the company's much appreciated B-platform, which underpins Fiesta sedan. Sources close to the development process revealed that the auto maker is planning to roll out two million units of the new model by the end of 2015. On this, Singh added, :Despite slowdown the compact SUV continues to buck the trend. Our expectation is that SUV sales will grow five fold by 2020.”

Coming to the technical figures of the 2013 EcoSport, the 1.0 litre EcoBoost engine is capable of producing a maximum power of 123 bhp, whereas the 1.5 litre petrol and diesel engines belt out 110 bhp and 90 bhp, respectively. Reportedly, manual transmission systems has been offered in both petrol and diesel models of EcoSport, while automatic gearbox has been only limited to the petrol guise. Interestingly, sales of compact utility vehicles globally increased by 154 percent between 2005 and 2012. Following this trend, the demand for small utility vehicles are anticipated to expand by 51 per cent globally in the next five years.

Discover more about this compact offering from Ford in our exclusive review at http://www.cartrade.com/reviews/Ford-EcoSport-116860.html