Force Motors has introduced four new variants of its iconic One Sports Utility Vehicle (SUV) in the Indian auto market. With the launch of new variants, the model's line-up now features a base EX variant, which has been tagged with a price of Rs. 8.99 lakh (ex-showroom, Delhi). Along with, the new top end variant, LX, has been equipped with Anti-lock Braking System (ABS), Electronic Brake-force Distribution (EBD) and a 4-wheel drive option. 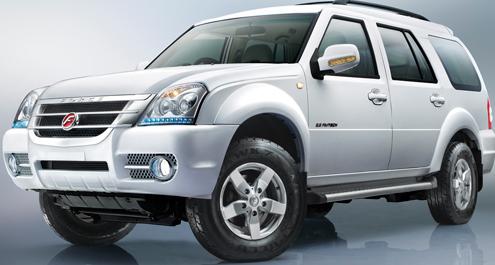 The new base model of One SUV has been equipped with an all-new BSIII compliant diesel engine, which belts out a maximum power of 80 bhp, along with a peak torque of 230 Nm. Adding to its performance, a synchromesh transmission has been mated to its engine, which results in smooth shifts in gears. Other key highlights of the model are alloy wheels, leather seats and day time running lights, which are however not present in the EX variant in order to to offer it as an economical car.

The SX and LX variants of Force One SUV now have an option of six and seven seats. Interestingly, the five seat SX variant, without ABS, has been priced at Rs. 11.78 lakh, while the addition of ABS and EBD adds another Rs. 28,000 in the earlier mentioned price. However, the price of top end LX variant with 4-wheel drive has not been disclosed yet, but the industry experts are of a view that it will be pitched slightly close to the Toyota Innova.

Speaking of the technical specifications of the model, a 2.2-litre turbocharged engine has been equipped with the Force One, which produces a maximum power of 138 bhp, with a peak torque of 321 Nm. Auto analysts believe that the major addition in the new Force One is its new 4-wheel drive system with the feature of switching between the drive systems. It is being said that the 4X4 drive was a much awaited feature in the Fore One, which has been now introduced.