After expanding its service network in India, Force Motors, which owns the Traveller and Trax Light Commercial Vehicles (LCVs), would be launching a new Trax Gurkha 4x4 on February 15. This Sports Utility Vehicle (SUV) would be powered by a 2399 cc OM616 engine, capable of producing 75 bhp with a highest torque of 195 Nm. Though this SUV was built in India 4 years ago, it did not fare well and was phased out, possibly due to lack of an extensive service network and outdated looks. This time around, Force intends to prevent these issues from occurring. 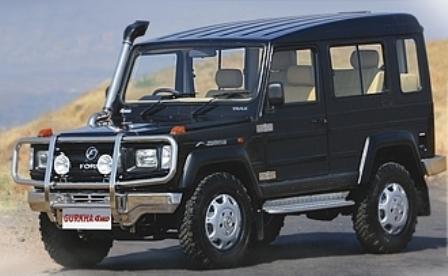 The beauty of the OM616 engine is that it is truly built to last, claimed to go on for almost 5,00,000 km, according to the company website. Engineers have designed this diesel engine such that it does not overheat, which happens to be a common problem with several diesel engine vehicles. Interestingly, this engine has been sourced from Mercedes-Benz.

Headlights and the front grille of the Gurkha have been redesigned to make them appear modern. Roof rails and alloy wheels have been sourced from the Force One SUV. The platform of the vehicle is based on the performance oriented G Wagon of Mercedes-Benz. This means that the Gurkha would definitely feel at home on treacherous terrain.

After Mahindra & Mahindra (M&M) launched the Thar, which has been fairly successful, Force realised the need of a genuine off-roader, which led to the relaunch of Gurkha in the Indian auto market. It must be noted that the Thar model is powered by a BS-III compliant direct-injection diesel engine and by a more powerful BS-IV CRDe engine. However, Gurkha would initially be sold only as a BS-III vehicle at a price close to the same variant of Thar.

Industry experts believe that the sales of Gurkha would depend on its final pricing. Post launch, the closest competitors of Gurkha will be Maruti Suzuki Gypsy and the Mahindra Thar. Based on the pricing, it may also encroach upon the territory of the Mahindra Bolero.