In a bid to expand its market share in the Indian car market, Fiat is working on several new cars to be launched in next two years. The Fiat Punto Adventure crossover is one of the mass segment vehicles that the Italian automaker will bring in to our shores. Our close sources reveal that the Punto based Crossover might be unveiled at the 2014 Indian Auto Expo in February, while the launch might happen by mid 2014. The vehicle was recently spotted by an Italian Magazine Quattro Route, during its test mule somewhere in Italy. 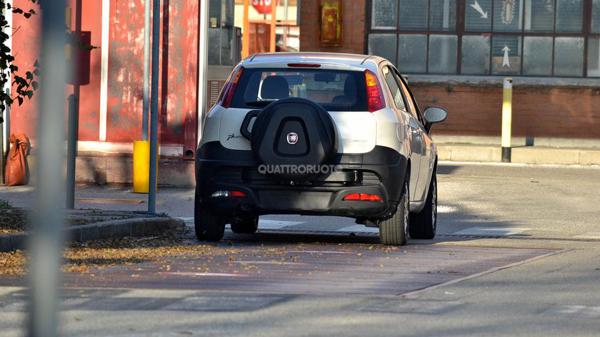 The redesigned rear bumper with mounted spare wheel on the boot highlights the true masculine personality of the crossover. The “Adventure” logo is embossed on the spare wheel, with a handle for gripping purpose. The tail lamp cluster, rear bumper reflector strips and reverse guide light have been taken from the Punto hatchback, however, the crossover gets a better protective cladding. The Punto Adventure is likely to get an electronic traction control.

The Adventure Crossover will share its engine options with the Punto hatchback. So, It will have the same 1.3-litre multijet powertrain with VGT (Variable Geometry Turbocharger) under the hood. This power-unit makes a maximum power output of 90bhp @ 6000rpm with 115Nm of torque. A 1.4-litre FIRE petrol engine will be on offer too.

The crossover will be an answer to the Volkswagen Cross Polo and Toyota Etios Cross. While the VW Cross Polo is already there in the market, the Toyota Etios Cross too is expected to be showcased at the Auto Expo, with launch taking place right after that. So, it will be the price that will decide the destiny of the Punto Adventure, which we are expecting to be around Rs 6 lakh.The Italian automaker has been working aggressively on its product strategy and dealership expansion in India, to tap a bigger market share. Fiat has officially announced to introduce its iconic SUV brand ‘Jeep’.and vehicles produced by its performance division Abarth.