DSK Hyosung is performing well in the Indian auto market as its super bike Aquila Pro has been selling well in numbers. This bike was launched on January 16 and since then the auto maker has delivered 145 units to the Indian bike aficionados in just two months. The reason cited for the success of auto maker is its quality of products, which compliments the offered services. The main USP of DSK Motorwheels is timely delivery as the auto maker believes that the eagerness to ride these sports bikes should not get exhausted. Reportedly, the company delivers its bikes in tenure of just 3 weeks from the booking date, unlike other sports bike makers who take months for the same. 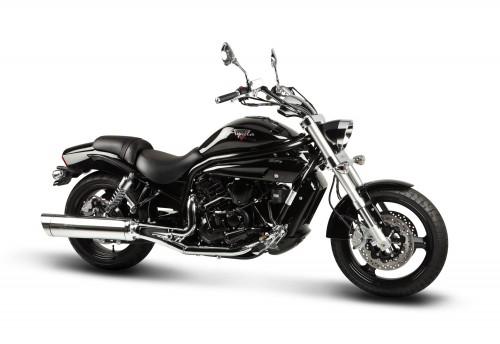 Expressing his views on the sales performance, the Director of DSK Motowheels, Shirish Kulkarni was quoted as saying, “We were confident that this world class product will get an overwhelming response from the bike aficionados in India. We always had the first mover’s advantage in the 650 CC segment. The other thing which played to our advantage was the timely delivery of the bikes, they were delivered within 1 week from the time the bikes were booked. It’s a clear indication that brand Hyosung is being taken seriously in India and that’s very invigorating for us. We have certainly kept our promise to deliver quality products in India as we have the numbers to back our claims now.”

Aquila Pro is equipped with a four-stroke, DOHC, water cooled petrol engine, which has a displacement of 647 cc. The maximum power churned out by this engine stands at 73 bhp at 9000 rpm with a peak torque output of 62 Nm at 7500 rpm. Adding to the performance of this engine, the five-speed constant mesh transmission system of Aquila Pro is doing an overwhelming job. In order to lure a number of buyers towards the model, the auto maker has introduced its model in three different colour options, namely Red, Silver and Black.

Interestingly, the key priority of DSK Motowheels is the optimum customer satisfaction and therefore, it makes sure that when a prospective buyer orders the bike, the delivery should not be late and he must be provided with best in class services. It must be noted that mere timely delivery is not just the benefit of opting for a DSK Motowheels vehicle and rather a number of other services are also offered by the auto maker. Services like 24x7 emergency call number, on-site emergency repairs, 24x7 on call breakdown service, lost key support, battery jumpstart, fuel delivery, transfer/towing of bike and taxi drop facility are offered by DSK Motowheels, which are first in class in the Indian auto market.

DSK Motowheels is an arm of Rs. 4000 crore DSK Group, which entered in the Indian auto space in 2012 by offering enthralling and performance oriented sports bikes, along with Hyosung as a partner in India. The Indian operations of DSK Motowheels are headed by Kulkarni who has a primary goal of offering cutting edge super biking experience to the Indian audience at an economical price. In order to offer cost effective vehicles in the Indian auto market, the auto maker has established an assembly unit in Wai, Maharashtra with more than 18 dealerships based across the length and breadth of the country.