Lexus had launched the NX 300h hybrid SUV in India in December 2017. The hybrid SUV is available in two variants – Luxury and F-sport- which is priced at Rs 53.18 lakhs and Rs 55.58 lakhs respectively (ex-showroom). Post much wait, the company has commenced deliveries of the vehicle, exactly four months after the prices were announced.

Mechanically, the Lexus NX300h is powered by a 2.5 litre, BSVI compliant, four-cylinder in-line petrol engine paired with an electric motor that produces a combined output of 194bhp of power at 5,700rpm and 210Nm of torque at 4,200 – 4,400rpm. Mated to E-CVT transmission, the SUV is capable of sprinting from 0-100kmph in just about 9.2 seconds with a top speed of 180kmph. Both the variants share the same engine and produce identical performance figures. The SUV offers five drive modes: Normal, Eco, Sport, Sport S+, and Custom. The vehicle also offers a stop/start system for saving fuel while waiting in traffic signals. 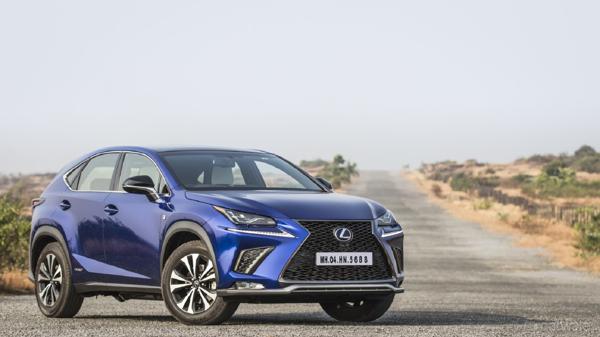 Visually, the Lexus NX300h gets the signature arrow-shaped Lexus grille and LED headlamps with independent LED DRLs below them. The large grille also features a blue lit Lexus badging. The rear gets sharp wraparound LED tail lamps, roof-mounted spoiler and a rear diffuser as well. The boot gets a hands-free power rear function, where the sensor below the rear bumper allows the user to effortlessly open and close the rear hatch with just a simple sweep of their feet. As for the sides, the SUV features plastic cladding around the flared wheel arches and side skirts. Lexus offers a full sized panoramic roof for ample light inside the cabin. The vehicle also gets a puddle lamp that has been installed on the door handles for convenience.

As for safety the Lexus NX300h gets eight airbags, ABS, EPB, hills start assist, TCS, 360 degree panoramic view monitor, vehicle stability control and an anti-theft system. The SUV also gets wide angle cornering lights and gravity ball sensor detects when the car is braking, accelerating or cornering, and finds and holds the right gear during that time.