Royal Enfield, renowned producers of the Bullet range of motorcycles, will launch the 500cc Bullet Classic C5 in India by 2010. The model is currently being exported to the US market but will be tweaked according to Indian driving conditions before being launched. The existing heavyweight models are homologised in Europe and the US to meet their specific rules and regulations connected to emissions and safety.

The company which is a part of Rs. 1500 crore Eicher Group also intends to scale up its annual manufacturing capacity to 60000 units from its present capacity of 44000 units. There have been regular orders for its 500cc Classic Bullet model from countries like the UK, Germany and the US. Moreover, nations like Australia, France, Italy and Japan are fans too. Now it intends to widen its exports based to other markets, including South American countries, Russia, Sweden, Norway, Israel, Canada and Belgium. 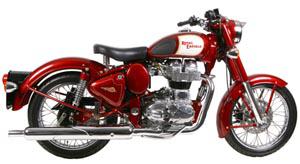 Apart from its 500cc model, Royal Enfield is also planning to launch two new models in India. The new models are expected to be based on the existing Thunderbird model comprising of unit construction engine-electric fuel injection platform (UCE EFI). While Thunderbird is its most popular brand in the metros, Electra is the best performer in the non-metros.