Ford India, the domestic arm of American auto maker, seems all prepared to introduce its much hyped compact Sports Utility Vehicle (SUV) EcoSport in the country. Interestingly, the authorised dealers of the company have now started accepting the bookings for the model and interested individuals can book the cars sometime in June or July. Sources have revealed that the Ford EcoSport will be offered in three different variants to the Indian buyers, which will help the auto maker in catering the demands of a larger section of society. 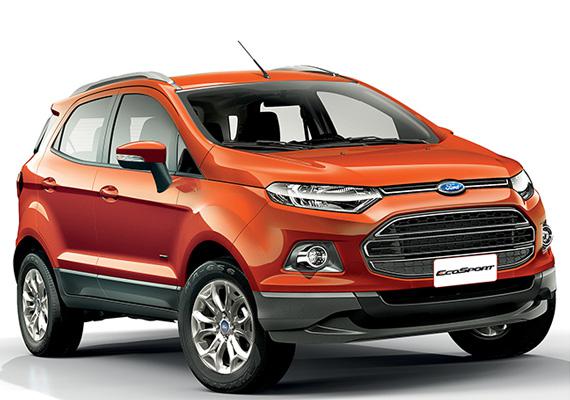 Reportedly, the base model of Ford EcoSport will be equipped with the same 1.5 litre petrol engine, which has been already doing a great job in the Fiesta sedan. Next in the list petrol variant will be equipped with the much hyped Ford EcoBoost 1 litre turbocharged petrol powertrain, which has won a number of awards for being both highly efficient and performance oriented. The last engine option expected to be offered by the Ford India will be the 1.5 litre oil burner, which is currently powering the Fiesta sedan. Industry experts are of view that this engine option will garner some strong sales for the company, which will help Ford to consolidate its position in the Indian auto market.

Along with three engine options, the auto maker will be offering four trim levels with its upcoming compact SUV, namely Ambiente, Trend, Titanium and Titanium Plus. Reportedly, the Titanium variant will be only offered with the 1 litre EcoBoost and 1.5 litre petrol engines. It must be noted that the Ford EcoSport has been already put on sale in many international markets and is delivering a tough competition to the likes of Renault Duster. EcoSport's marketing campaign has been underway, which has promoted the model so well that every Indian is waiting for the launch of EcoSport in the market.

However, Ford India has not yet officially declared the exact pricing of its upcoming model, but as the model will be manufactured in the country, a high degree of localisation is expected. This move will surely help the company in incorporating a high degree of localisation in the production process, resulting in cost effective prices of the model. On the pricing terms, auto analysts have stated that Ford India has already tasted bitter by offering high prices with its Fiesta sedan in the initial stages. Therefore, this time, the auto maker will research much before quoting the exact price of EcoSport in the Indian auto market.

Growth in sales of Royal Enfield, figures of VECV decline in India