The Indian arm of BMW, a well appreciated German multinational premium automotive marque, has showcased the facelift model of its 7 Series LCi luxury saloon at the Jodhpur One World Retreat. The His Highness Maharaja Gaj Singh II of Jodhpur had organised a raising awareness meet for the Indian Head Injury Foundation and personally invited BMW to grace the occasion, which was actually the luxury mobility associate for the event. Accordingly, the occasion seemed right and just about perfect for the German auto major for the unveiling of 2013 7 Series LCi model. 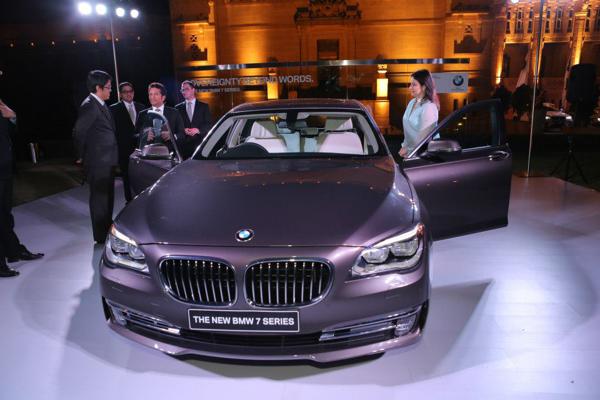 Speaking his mind regarding the launch of '13 7 Series LCi to the elite audience, Philipp von Sahr, President, BMW Group India, was quoted as saying, “BMW is proud to be associated with His Highness Maharaja Gaj Singh II to support the Jodhpur One World Retreat and raise awareness for Indian Head Injury Foundation. This event is something very special: just like the new BMW 7 Series. As the flagship car from BMW, the new BMW 7 Series will maintain the tradition of being the most modern premium luxury sedan of our times.”

The 2013 BMW 7 Series LCi facelift flaunts a revamped kidney-shaped front grille, reworked Squarish xenon headlamps with LED corona rings and integrated 8-LED indicators, remoulded front bumper with modified air intake. At the rear end of new 7 Series, there is a stylish remodelled rear bumper with an integrated chrome strip along with dark and light red inserts in the tail lamps. Further, the xDrive badge has been shifted from side to rear. Coming to the interior cockpit setting, the BMW 7 Series facelift comes equipped with the cutting edge iDrive system onboard, reworked leather trimmed seats and separate 9.2 inch LCD screens for the rear passengers. The German auto major has not revealed details about technical and engine specifications at the moment, for which the Indian luxury car enthusiasts will have to wait a little while longer.