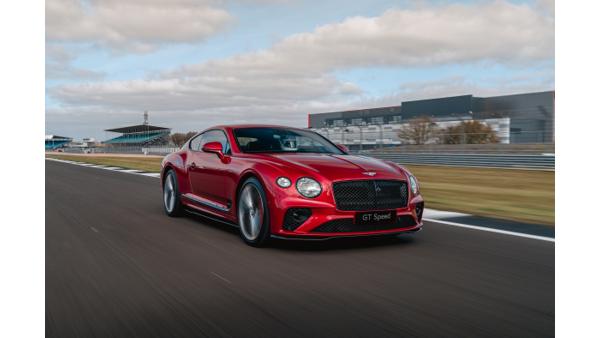 The new Continental GT Speed Coupe and Convertible are known to be the most dynamic road-going Bentley’s ever made. The company claims that a combination of four chassis technologies gives the Continental GT Speed a level of agility, performance, and ride quality that has been stretched to new levels. Bentley Dynamic Ride and three-chamber active air suspension with adaptive damping play a key role in the balance of the car. Moreover, the optional and newly-developed carbon-ceramic brakes, variable electronic stability control, all-wheel steering, and an electronic limited slip differential claims to bolster the agility and performance even further.

The Continental GT Speed is believed to feature the largest car brakes in the world. The new carbon-ceramic braking system boasts 440mm diameter front discs combined with new ten-piston front calipers. The latest generation of the carbon-ceramic disc has been specially formulated to provide class-leading braking performance with copper-free brake friction material for reduced environmental impact. The new ceramic brake system offers a weight saving of 33kg compared to the iron braking system, and most importantly this is un-sprung weight claims to lower the inertia and give the vehicle more responsive handling.

The ceramic brake has been extensively tested around the world including at the Nurburgring Nordschleife where it set levels of braking performance never before achieved by a Bentley. In objective tests the ceramic brake has proven itself to be exceptionally fade resistant – after ten consecutive from 129kmph, the stopping distance only increased by 1.1 metres, to just 61.1 metres.

With the ESC system engaged, the car provides reassuring stability over uneven surfaces, abnormal cambers or in inclement weather conditions. When switched to Dynamic mode, the ESC system extends the freedom of the driver, allowing the experienced pilot to set and alter the cornering stance of the car at their discretion.

With the ESC switched off, the mechanical grip and inherent balance of the GT Speed come to the fore, allowing a driver-focused experience previously only seen in Bentley’s racing machines. After utilising strong turn-in performance thanks to the All-Wheel Steering and eLSD, on track the driver can choose to balance throttle and steering to deliver effortless, progressive yaw angles.

New Electronic All-Wheel Steering enhances the dynamic nature of the Speed in each of the driving modes. This is even more apparent in Sport mode, as the steering combines with Bentley Dynamic Ride and the electronic limited slip differential for a level of agility unlike any other Bentley road car, utilising up to four-degree angle of steering lock on the rear wheels. At low and medium speeds, the GT Speed’s rear wheels are steered in the opposite direction to the front wheels to aid a rapid change of direction, noticeably increasing the feeling of nimbleness. The steering feels sharper and with a quicker ratio, and a commensurate increase in steering feel provides even more driver confidence. At high speeds, the rear wheels steer in the same direction as the front, to improve stability. The system is significantly more active on the GT Speed than it is on the Flying Spur, where its primary purpose is a reduction in turning circle and enhanced high-speed stability.

For the first time in a Bentley, the latest generation of the Continental GT Speed introduces the use of an electronic limited slip differential (eLSD). Specifically tuned hand-in-hand with the traction control and active chassis systems, the eLSD provides increased lateral capacity, improved longitudinal stability, enhanced on-throttle adjustability and delivers better traction in adverse road conditions. In Sport mode, the eLSD has been tuned to balance on- and off-throttle adjustability, improved turn-in response and increased straight-line performance. The combined benefit means the Continental GT Speed is now more adjustable and more driver-focused than ever before without compromising comfort or stability.