A division bench of Madras High court ruled in favour of TVS Motors this week. This enables TVS Motors to re-launch its 125cc model Flame with twin-spark technology. The division bench refused a stay on the order which prevented TVS Motors to manufacture and market the model with disputed technology. The bench, comprised of Mr justice V Dhanapalan and Mr justice MM Sundresh, declined to grant a stay of order and adjourned the application for stay by two weeks. 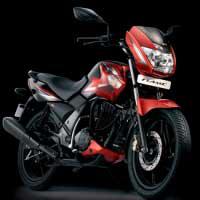 Now Bajaj Auto plans to move the Supreme Court in next few weeks to file an appeal once again against TVS Motors. The battle between the two companies has been going on for nearly a year and TVS Motors was forced to re-launch its 125cc model Flame with single spark plug. The division bench ruled that the twin-spark plug manufactured by TVS has distinctive feature and does not infringe Bajaj’s patent.