Bajaj Auto India, one of the country's leading two-wheeler manufacturers, is believed to be readying its new sports bike Pulsar 375 for the domestic motorbike enthusiasts. The Bajaj Pulsar 375 is expected to share its basic 4-stroke, single-cylinder engine platform with the newly launched KTM Duke 390 naked motorcycle and will come equipped with several top draw sporty attributes. Industry sources have suggested that the Pulsar 375 model would be the most affordable sports bike available in the Indian auto market and could be priced just a fraction more than Rs. 1.6 lakh. 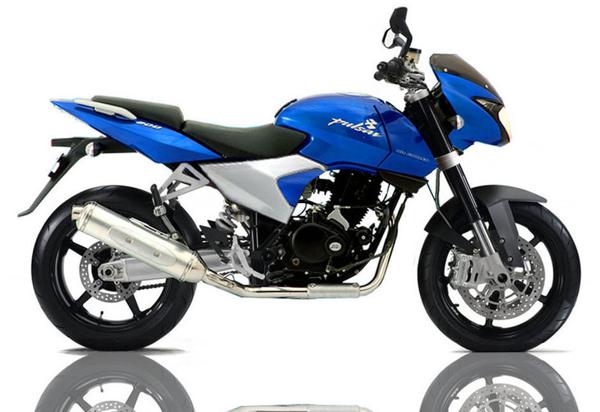 Bajaj Auto Limited is well aware of the demands of domestic bike lovers and has won many hearts on the back of its Pulsar range over the years. The company's flagship Pulsar 200NS motorcycle is one of the most sought after motorbikes in India and the upcoming Pulsar 375 model is expected to set several new benchmarks in the entry level sports bike segment. The fresh KTM Duke 390 naked motorbike has already garnered many admirers in the country and Bajaj Auto will be hoping to accomplish the same with its new Pulsar 375.

The yet-to-be launched Bajaj Pulsar 375 is going to be a full-fledged sports bike, which will be served by a 373 cc, 4-valve, Triple Spark, SOHC engine. This power-mill should develop top power output around 40 to 42 bhp and a highest turning force close to 32 Nm. The sports bike is expected to come packed with several cutting-edge technologies, such as liquid cooling system, 6-speed close-ratio transmission system and Anti-lock Braking System (ABS). Some initial spy pictures are already available on the internet and the Bajaj Pulsar 375 bike definitely looks like a mean combination of bold looks, aggressive styling and a powerful engine. The 373 cc power-mill will be especially tweaked for Indian bikers and should breach the 150 kmph mark without breaking a sweat.

The upcoming Bajaj Pulsar 375 will take on the likes of KTM Duke 390, Honda CBR 250 ABS and Kawasaki Ninja 300 in the entry level sports bike segment of Indian market. The Pulsar 375 is expected to come priced around Rs. 1.6 lakh in the country. At present, the KTM Duke 390, Honda CBR 250R and Kawasaki Ninja 300 motorbikes are priced at Rs. 1.8 lakh, Rs. 1.7 lakh and Rs. 3.5 lakh, respectively in India. Therefore, Bajaj is expected to smartly price its Pulsar 375 sports bike, which could definitely stir the competition if launched with a tag around Rs. 1.6 lakh in the market.