Audi has patented a new RS Q8 moniker and registered it with the European Union Intellectual Property Office recently. The performance version of the upcoming Q8, is expected to arrive in the couple of years’ time. Ahead of it, we have an exclusive digital rendering of the RS Q8. 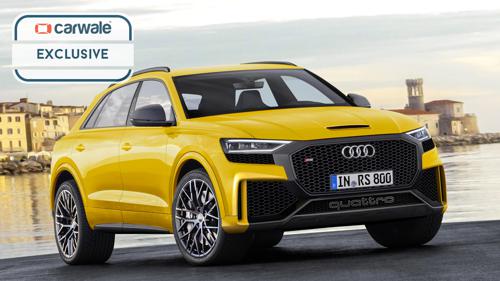 The Q8 flagship SUV will be based on the Q8 Concept showcased at the Geneva Motor Show earlier this year. Audi confirmed that an increasing number of their SUVs will be wearing the high-performance RS badge in the subsequent years. The Q3 is the first and only SUV/crossover right now with the RS version, with the RS Q5 and the RS Q7 next in line. However, before the latter two, the German carmaker has trademarked the RS Q8 name, which means that Audi is not wasting any time with its performance SUVs. The German carmaker showcased the SQ8 Concept as well, but the new RS Q8 will be an even hardcore version of the SUV.

As can be seen in the image, the new SQ8 will have an aggressive fascia with a mesh grille and black inserts. The sportier wheels and side skirts will be joined by blacked-out roof rails as well. The front bumper will feature larger air vents with a hooded scoop expected to add the appeal of the SUV. Unlike the SQ7, which uses a diesel engine mated with electric motors, the new RS Q8 will be powered by a powerful gasoline engine from one of Audi’s performance cars. A reworked 4.0-litre biturbo V8 is the best candidate with a power output of more than 600bhp. It will have the hallmark Quattro all-wheel-drive system and an automatic transmission.

Audi has realised that, with the shifting trends towards SUVs, the car buyers prefer a performance-oriented, high riding vehicle over a proper sports car. Apart from the new Q8, the upcoming Q4 will also get the RS treatment in time to come.