Details of the new CC100 Speedster made by the British super sports and luxury car manufacturer Aston Martin have been released. This vehicle is based on the V12 Vantage and made its public debut at the Nürburgring 24 Hours race held in Germany. The development of the new CC100 Speedster Concept is part of the Aston Martin centenary celebrations this year. Its design has been inspired by the famous DBR1 race car, which was driven by the legendary Sir Stirling Moss in the 1,000 km race on the Nürburgring circuit, where it was the winner. Both the original DBR1 and the CC100 completed a lap around the circuit on May 19, 2013. 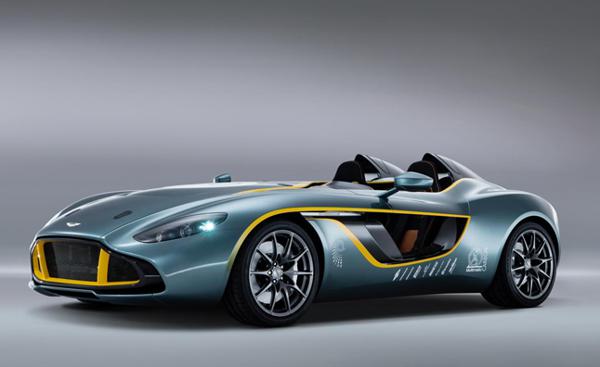 The design of the new Aston Martin CC100 Speedster does not only reflect the past, but also gives an indication of the future design direction for the British super car maker. Noticeable features in the vehicle which could be used in the future include a new Aston front grille and a fender vent, along with a change in the rear theme. The CC100 concept car was created in less than 6 months at the company's global headquarters in Gaydon, England. Its total length is almost 15 feet from the nose to the tail and width is 6.5 feet.

The Aston Martin CC100 Speedster concept is powered by a front-mounted V12, with a displacement of 6.0 litres and power rating of more than 500 bhp. The power-mill is mated to an automated sequential manual gearbox, which makes use of paddle shifters. It allows the vehicle to accelerate from 0 to 100 kmph in a little more than 4 seconds, while the top speed is 298 kmph. Apart from this, the body is completely made out of carbon fibre and the engine sits on a rigid aluminium chassis. The car has been designed by Aston Martin's Chief Designer Marek Reichman, along with the company's Exterior Designer Miles Nurnberger.

During the CC100's debut in Germany, it was driven by Aston Martin Chief Executive Officer (CEO), Ulrich Bez. He said, “The future of Aston Martin is, very clearly, more exciting now than perhaps at any time in its history and I’m looking forward to seeing the excitement and anticipation that CC100 creates among Aston Martin owners and enthusiasts worldwide.”