Aston Martin has released the prototype images of the all new V8 Vantage ahead of its year-end debut. 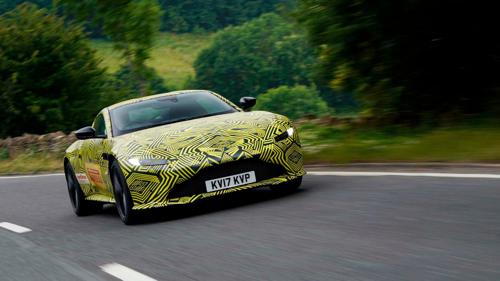 The new V8 Vantage will be similar to the DB10 Concept rather than the DB11 flagship, as was speculated earlier. The DB10 Concept’s inspiration can clearly be seen under the camouflage. A few leaked patent images of an Aston Martin from the Japanese patent office surfaced last month and those have now been confirmed to be strikingly accurate with this prototype.

The Aston Martin’s newly adopted grille (from the Vulcan) can be seen paired with an aggressive splitter. The headlights, although camouflaged, seemed to be scrounged directly from the DB10. The fender vent is something first seen on the DB11 and is expected to make its way on all future Aston Martins. The flared wheel arches lend the Vantage a sporty stance. 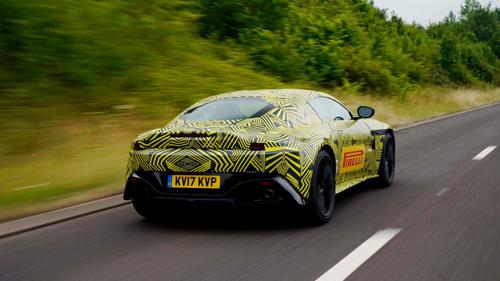 At the rear, the lip spoiler is flanked by the sleeker tail lights similar to the one seen on the current Vanquish. The Vanquish inspiration continues on the rear windscreen as well. The diffusers are a lot more prominent now, nicely shaped and done in gloss black with integrated exhaust tips.

As far as powertrain is concerned, the new Vantage will be the second vehicle to benefit from Aston Martin’s partnership with Mercedes-AMG, after the DB11 V8. The same 4.0-litre twin turbo V8 built by Mercedes-AMG for the AMG GT lineup will be reworked by Aston Martin. The power output will be around 500 bhp, enough to send the Vantage whizzing from standstill to a 100kmph in around four seconds. Aston Martin is expected to offer the new Vantage with a choice of either a six-speed manual or a dual-clutch automatic transmission.

Aston Martin confirmed that the new Vantage V8 is due this year, with a V12 version joining it sometime next year. The new AMR performance version is also on the cards, but that will come later.

Suzuki Swift Sport official details out ahead of Frankfurt debut