Nissan’s mighty GT-R sports car has been launched in India at Rs 1.99 crore (ex-showroom Delhi). It was revealed at the 2016 New York Auto Show earlier this year and is the third iteration for this vehicle. It was revealed here in the presence of Bollywood star and Nissan Ambassador John Abraham. 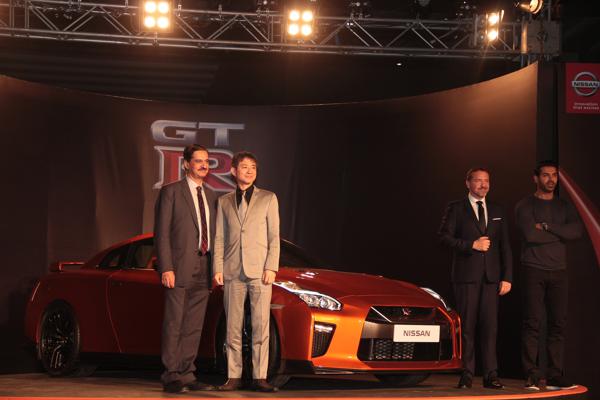 Known ‘fondly’ as the Godzilla, the GT-R is powered by a 3.8-litre 24 valve V6 engine under the hood, which packs a punch of 560bhp and 633Nm all of which is accessible to the right foot from 3200rpm. The power is put down on the road via a 6-speed dual clutch transmission, rotating all four wheels. The sprint from zero to a ton comes up in under 3 seconds and the car will go all the way to a top speed of 315kmph, claims the Japanese manufacturer.

The GT-R has always been a technological masterpiece and the 2017 model isn’t any less with even more performance upgrades. The car has individual ignition timing control of each cylinder, titanium exhausts and an improved aerodynamics for a higher downforce, ensuring better handling of the car.

The trademark pair of circular tail lamps and the instantly recognisable wrap around headlamps is retained, but the new GT-R comes with reworked bumpers and bonnet. Nissan’s new V Motion grille finished in matte chrome adorns the centre of the fascia, whereas the side skirts are protruding for the improved airflow around the vehicle. At the rear, are the quad exhaust pipes, with characteristic GT-R spoiler. The car is riding on newly designed 20-inchers.

The sportiness of the GT-R continues to woo on the inside, with an 8.0-inch infotainment screen in the centre. The number of buttons on the console has been reduced to declutter the dash and now  is just 11 instead of 27 on the previous car. There are carbon fibre garnishes around, with paddle sifters behind the steering wheel. Nissan says the GT-R is a 2+2 instead of a 2 seater sports car.

The 2017 GT-R gets a new Katsura Orange body colour, along with the regular colour which includes vibrant red, pearl black, peal white, racing blue, gun metallic and ultimate silver. Whereas on the inside, the trim has an option of red, tan, ivory and black.

In India, the GT-R will be imported as a CBU. It rivals the Jaguar’s F-Type and the Porsche 911 Carrera 4S. It will be sold exclusively in Delhi initially, booking commenced in September with manufacturer starting delivery to its first customers.