The new 2016 Toyota Innova debuts in Indonesian market for 282 million Indonesian Rupiah (Approx Rs 13.65 Lakh). Toyota has offered the new Innova in three trims namely G, V and the top-of-the-line Q variant. The new model comes with a new design and a new engine as compared to the older model. In India, it could likely be unveiled at the 2016 Auto Expo event. 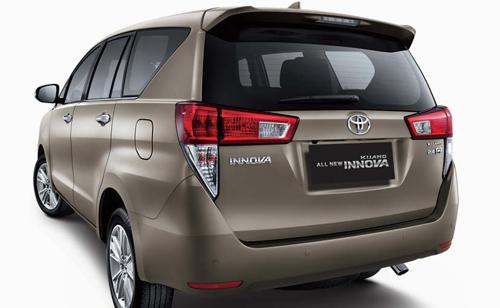 The new Innova from Toyota based on New Global Architecture (TNGA) platform is stated to be lighter than the older generation. As part of fresh upgrades, it gets LED daytime running lamps, sweptback head-lamps new fog lamps and a new grill. As for the rear, the bumper and tail-lamps have been redesigned. The vehicle also gets 17-inch alloy wheels. For convenience, it comes with automatic A/C, TFT type MID, 8-inch advanced entertainment system, Bluetooth support, premium illumination lamp and much more.