Honda Amaze, the first diesel sedan for the Indian auto market from the Japanese auto manufacturer, is to be officially launched on April 11, 2013 as claimed by our sources. Bookings for the sedan have already been opened and the company has produced 10,000 units of the same, to ensure that there are no delivery delays. Many new offers such as extended warranties, exchange offers and maintenance packages are also expected from the company, in order to lure domestic car enthusiasts to its retail outlets. 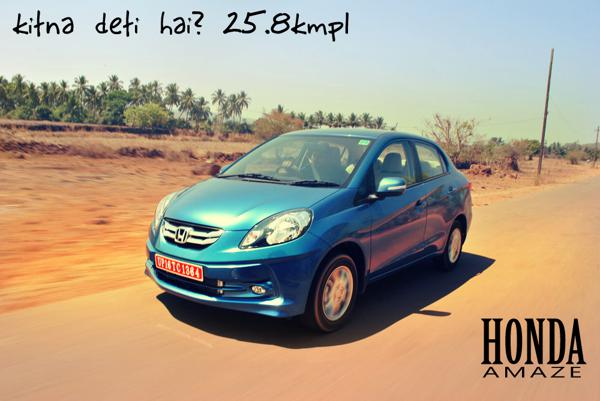 The yet-to-be launched Honda Amaze will be powered by a 1.5 litre i-DTEC diesel engine, producing 99 bhp of power and 200 Nm of torque. The diesel engine is based on the latest ‘Earth Dreams Technology’, currently being followed by the Japanese manufacturer. This is the lightest engine among vehicles with similar torque outputs. In addition, the Amaze would also be fitted with a 1.2 litre i-VTEC petrol engine that churns out 87 bhp of power. Incidentally, this would be the same engine that powers the current Brio hatchback. Both engines would be mated to 5-speed manual transmission gearboxes. As revealed recently, the Amaze will be delivering class-topping mileage of 25.8 kmpl, certified by ARAI.

From the exterior point of view, the Amaze looks similar to the Honda Brio hatch from the front, as it is a Brio-based sedan. However, many differences can be seen on the sides and the back. For one, the rear looks well integrated into the entire vehicle, unlike the Indigo and the Maruti Suzuki Swift DZire. Sharp lines of design with curves are visible along the sides. The boot, along with tail lamps, looks aesthetically appealing as well. Overall, the design reflects a Smart Micro Limousine concept, which displays attributes of design, compactness, space and manoeuvrability. On the inside, the Amaze gets beige dual tone interiors, along with new seat fabric pattern. Colours on the central area of the seat differ from those on the sides, reflecting a beautiful contrast not seen on other entry level sedans. There are also several smart storage spaces such as the glove compartment, doors, behind front seats and on the central console.

Collapsible Electric Power Steering on the Amaze allows one to easily handle the vehicle at low and high speeds. Advanced Compatibility Engineering (ACE) minimises the damage to self ands other vehicles during an accident. Top variants also get dual SRS front air backs, Anti-Lock Braking System (ABS), Electronic Braking Distribution (EBD) and 3-point ELR seat belts with pre-tensioners and load limiters. At the front, Pedestrian Injury mitigation technology absorbs energy on impact. Thereby, industry experts believe that Honda has the capability to create a strong customer base with this vehicle, depending on the price point.

In the entry level sedan segment, Honda Amaze would be competing against top selling models Maruti Swift DZire, Chevrolet Sail and Tata Indigo eCS. While the Amaze would be available between Rs. 6 lakh and Rs. 8 lakh, segment leader Swift DZire is offered to domestic car buyers from Rs. 5 lakh to Rs. 7.5 lakh. Similarly, Indigo eCS is available from Rs. 4.8 lakh to Rs. 6.3 lakh. On the design front, Amaze certainly looks better than the other two vehicles. It would also have the highest mileage in this segment, with the Indigo eCS coming in at a close second position. For the aforementioned reasons, Honda expects its Amaze model to give a tough fight to its competition in the entry level sedan segment.