Memories of a bygone era were recollected as several vintage cars travelled from Jai Mahal Palace to Castle Kanota and back, through the historic city of Jaipur on Sunday, 3rd March 2013. The 15th edition of the Vintage Car Show was organised by Rajputana Automotive Sports Club, in conjunction with Rajasthan state tourism department and Audi Jaipur. The sunny weather of the pink city added to the charm of the grand occasion. 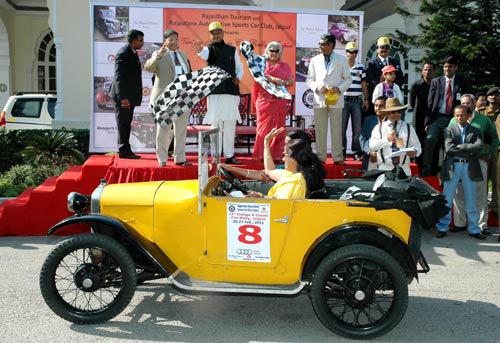 Speaking at the occasion, D N Kasliwal, President of Rajputana Automotive Sports Car Club, said, “The Vintage & Classic Car rally has attracted a lot of interest and this year a record number of cars participated in the event. The awareness created by the rally has helped Jaipur become one of the prominent destinations for restoration of old cars.”

Royal families in Rajasthan had a splendid taste for vintage automobiles, which were seen to be restored and running in pristine condition during the rally. Many of the cars were imported from England and America at the time of princely rule. The Rajputana Automotive Sports Car Club was started in 1996 with only 14 vintage beauties, while the latest edition of the Show saw 104 participants. 15-20 cars were driven down from Delhi and were part of the Heritage Motoring Club of Delhi (HMCD).

30 vintage restorers are present in the state as of now. Interestingly, some restored these vehicles for the sheer love of automobiles, while others did it to simply rejuvenate their old classics. It was commonly known among participants that spare parts of these vehicles are fairly difficult to procure, but can be done with help from the right contacts. While vintage buffs have kept an eye out for any newly restored beauties, many of these participants have inherited vehicle due to their royal lineages. “I brought two cars to the rally - Austin-7 (1926) and Austin-7 (1938). My great grandfather held an important position under the Jodhpur Maharaja. These two cars are a legacy he has left behind,” said SS Singhvi.

These rare vehicles were definitely a beautiful sight for visitors and car aficionados, who hardly get to see such beauties on roads. Many participants also claimed that these vehicles were driven for the sheer love of automobiles and modern Japanese engines failed in comparison to the engines in these legends.

Winners for different categories were declared after completion of the rally. Concours D' Elegance was awarded to Diljeet Titus for his Buick 90L 91935), while the ‘Most original car’ award went to Amit Gupta for Ford A (1928). The ‘Oldest car’ award was provided to Ghani Autos for Austin Chummy (1923), which was undoubtedly the oldest machine in this rally. The ‘Most unique car’ award went to GEM Palace for Mercedes Benz (1939) while ‘Best restored car’ award was also given to Ghani Autos for their Ford Pick Up (1932).