Maruti Suzuki Desert Storm, the country's most awaited off-road motor sporting event, is going to be flagged off from New Delhi on February 18, 2013. Maruti Suzuki India Limited (MSIL), the country's largest passenger car maker, is one of the front runners in organising and conducting off-roading adventure tournaments, such as Desert Storm, Raid De Himalayas, Dakshin Dare and Auto Cross. The 2013 season is the 11th chapter in the immensely successful and popular Desert Storm motor sporting enterprise in the country. 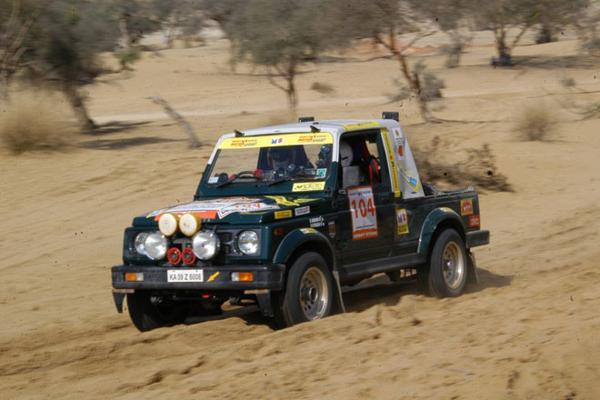 The Desert Storm is a six day event that will see Indian off-roading enthusiasts treading tricky and demanding terrain of Rajasthan's Thar Desert. The gripping event is expected to witness participation from as many as 275 domestic adventure motor sporting aficionados in its entire course. The National Capital will serve as the origin point for the Desert Storm rally race, which has been planned to cover a distance of 2,500 km, filled with highly intense and adrenaline gushing action. The rally will traverse through some exciting off-road terrains, including those of Bikaner, Chattargarh, Jaisalmer, Pokharn Gajnaur, and Lakshmangarh. After six days of nerve wrenching off-road action, the 11th Maruti Suzuki Desert Storm will end on February 23, 2013 in Jaipur.

Every year the Desert Storm tests Indian drivers' ability to dominate any uncertain, wicked and demanding regions, given to them using their Sports Utility Vehicles (SUV). The motor sporting spectacle will see motor vehicle enthusiasts competing in four wheeler, two wheeler and All Terrain Vehicle (ATV) categories. The 11th edition has been organised to include five competitive race stages that includes two night legs as well. According to experience, driving and endurance skill sets, the Maruti Suzuki Desert Storm has been categorised into four segments- Moto, Xtreme, Xplore and Ndure, all of which test a driver's ability to tread complex off-road terrains of Rajasthan.