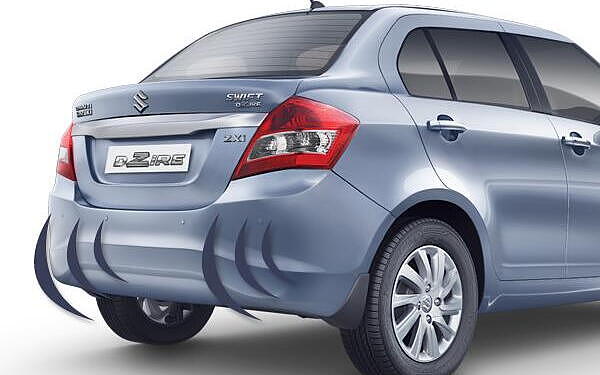 Maruti Suzuki Swift DZire has been discontinued in 2017. We are showing the last known price for Swift DZire.

The DZire now got a cosmetic upgrade with the titivated version. There is a new front grille, new headlamps, revised front bumper, rear bumper, tail gate, alloy wheels and even tail lamps. The engine options on the DZire have increased now and even the engines are tweaked for better performance and even better fuel efficiency.The diesel engine produces 74bhp, 190Nm and it now even has an option of an automated manual transmissions as well. The petrol variant produces 83bhp and 115Nm and comes with manual and automatic options.

The Maruti Suzuki Swift DZire is one of the best-selling compact sedans and the recently given facelift makes it look stylish and more premium. The Swift DZire now has a thick chrome grille that makes it stand out and smoked-out headlamps too. The front bumper has also been re-designed. The side profile remains the same, except for the new design of the alloy wheels. The Z variant has alloy wheels and 15-inch wheels, while the other variants have steel wheels and 14-inch wheels. The rear also has changes at the rear, for instance the new chrome strip that runs across.

The interiors of the Maruti DZire are one of the best in its segment. It isn’t very jazzy, it is a neat flowing centre console with black and beige dual tone that makes it look premium. The integrated music system has USB and aux connection and now it even gets bluetooth connectivity. The steering mounted audio controls now even have telephone answering and rejecting buttons added as well. There is now even keyless entry and push start and stop button. The DZire is now a lot more feature loaded than before.

The DZire has beige-coloured fabric seats and can seat five people. The boot at about 300 litres isn’t the largest but is good enough.

The engines on offer, the petrol and diesel have good performance and mileage. These are well balanced engines. The ride quality of the Swift DZire is good and even the handling is just fine. The suspension set-up on the DZire is more for comfort while that on the Swift is a bit more sporty.

The brakes on the Swift DZire are disc at the front, while the rear continues to have drum brakes. There is ABS with EBD on offer for higher variants.

The 1248 cc Diesel - powered variant delivers a fuel economy of 24 kmpl in city and 26 kmpl on highways, while the Petrol variant offers a mileage of 18 kmpl on urban roads and 20 kmpl on freeways, respectively.

The DZire is now offered with dual airbags as an optional feature across all the variants. This shows how Maruti Suzuki is working towards enhancing safety. The other safety features on the DZire are seatbelts, ABS, engine immobiliser, halogen headlamps, side impact beams and central locking.

The DZire is certainly a class leading product in its segment and also the best seller. Maruti knows what the customer needs and they have nailed it to perfection despite several shortcomings in the compact sedan.

The Maruti DZire is a direct competition to the Tata Zest, Honda Amaze, Ford Figo Aspire and the Hyundai XCent. The DZire is certainly the best seller and has the best resale value too.

Find a list of all 8 petrol and 6 diesel versions of Maruti Suzuki Swift Dzire [2015-2017]. This table includes on-road price which covers all costs like RTO and Insurance.