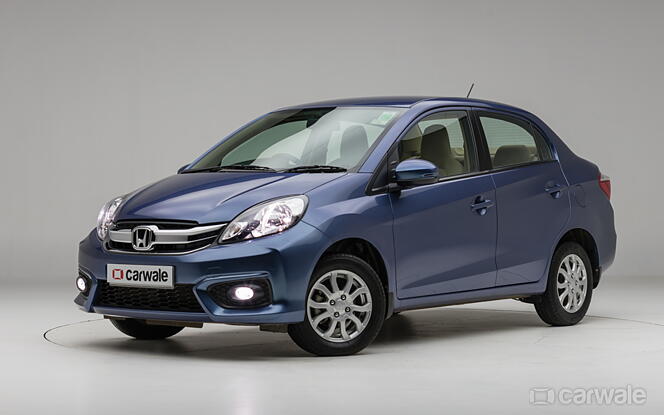 Honda Amaze has been discontinued in 2018. We are showing the last known price for Amaze.

Hailed as one of the better designs in its segment, Honda updated the Amaze in 2016 as the competition got stiffer. The Amaze was Honda’s answer to the Maruti Suzuki Dzire and the segment pioneer – the Tata Indigo CS. The segment in question is the sub-four metre compact sedan segment, the one created by the genius of the Indian regulations. Moreover, the Amaze is also the first ever Honda on sale in India to get a diesel engine, the 1.5-litre Earthdreams that would power every possible Honda car for years to come.

Based on the Brio hatchback, the Amaze competes with the likes of the Maruti Suzuki Dzire, Tata Zest, Hyundai Xcent, Volkswagen Ameo and the Ford Aspire.

Further to this, read Honda Amaze Road Test details by our expert.

Honda Amaze’s Brio roots are evident in its design. The Amaze gets a new front grille with a thick chrome slat and this is similar to the new City while the headlamps have been carried over. The profile is very much the same, it has the Brio design till the B-pillar, beyond which the rear door has become longer than its hatchback counterpart. The tail gets its share of tweaks with new tail lamps and a reworked boot lid.

Honda’s Man Maximum Machine Minimum strategy has always ensured that the Amaze is one of the most spacious compact sedans. It has good space at the front and even the rear and it has a boot capacity of 400 litres, which is one of the highest in its segment. With the facelift, the dated interiors give way to the fresh dashboard that resembles the Honda City and the new BR-V. The piano black centre console complements the black dashboard which gets new AC vents.

The Honda Amaze offers features like dual airbags from the S trim. The Honda Amaze has front disc brakes, while the rear are drums. It comes with ABS (anti-lock braking system) with EBD (electronic brake force distribution), but these are offered starting with the SX trim. The Amaze even has engine immobiliser, WAVE key, high mounted stop lamp, front seat belt and driver seat belt reminder as well.

The Honda Amaze comes with a 1.2-litre petrol engine that produces 87bhp of power and 110Nm of peak torque and is mated to five-speed manual gearbox. As for the petrol automatic variant, the old-school torque converter has been replaced by a new CVT gearbox. The 1.5-litre four cylinder turbocharged diesel engine develops 98bhp of power and has one of the best torque curves in the segment offering linear power delivery across the rev range. The diesel also comes with a five-speed manual gearbox and drives the front wheels.

The 1498 cc Diesel - powered variant delivers a fuel economy of 23 kmpl in city and 25 kmpl on highways, while the Petrol variant offers a mileage of 15 kmpl on urban roads and 17 kmpl on freeways, respectively.

Find a list of all 11 petrol and 8 diesel versions of Honda Amaze [2016-2018]. This table includes on-road price which covers all costs like RTO and Insurance.