Ford launched the latest iteration of the Aspire in 2019. The American compact sedan received a facelift after being around in the country unchanged since its introduction in 2015. The mid-life refreshment comes with a new petrol heart and comprehensively updated interiors. The compact sedan has been launched in 11 trim levels with three powertrain and one transmission option.

The updated Aspire gets a new fascia which is highlighted by the imposing honeycomb pattern chrome grille, C-shaped fog lamp pods and revised bumpers. It rides on a stylish set of multi-spoke alloy wheels. At the back, there are revised tail lamps and a new chrome slat at the back. The elements around the fog lamps and headlamps are the same as seen in the Freestyle, albeit in chrome. These visual updates make it look similar to the larger Figo sedan on sale in South Africa or the Freestyle sold here in India.

The most prominent changes in the facelift are on the inside. The Freestyle inspiration continues but instead of the brown finished dash, the Aspire gets a dual-tone dashboard with a beige-black finish. The most important update for the Aspire is the floating touchscreen with SYNC3 infotainment system in addition to Apple CarPlay and Android Auto. We have reviewed this system in our touchscreen system comparison and you can read all about it over here. The instrument cluster is scrounged unchanged from the CUV and the beige upholstery lends the Aspire a premium feel.

Find a list of all 2 petrol and 2 diesel versions of Ford Aspire. This table includes on-road price which covers all costs like RTO and Insurance. This is the latest iteration of the Ford Aspire. A much-needed refreshment has been brought in three years after this sub-compact sedan was first launched in India. The carmaker has made a host of cosmetic changes like a revised face, tweaked rear and<

This is the latest iteration of the Ford Aspire. A much-needed refreshment has been brought in three years after this sub-compact sedan was first launched in India. The carmaker has made a host of cosmetic changes like a revised face, tweaked rear and an updated cabin. This comes along with mechanical upgrades in the form of a five-speed gearbox and two new petrol engines. The latter are from Ford's new Dragon engine family that was already seen on the new Ford Freestyle and the EcoSport. So, how effective are these changes? We find out. The overall shape and design remain quite similar to the older model, but the face looks very new now. There are also many things that helps distinguish between the Aspire's old and new model. For starters, the old Aston Martin-ish grille with chrome slats is now replaced by a subtle, better-looking honeycomb pattern. The re-profiled bumper gets a black housing incorporating the air dam and circular fog lamps with C-shaped chrome surrounding them. Sadly, the car still misses out on DRLs, a pair of which could have added to the appeal. Then, the silhouette is the same albeit with new ORVMs and classy multi-spoke alloy wheels. Besides, a reworked rear bumper, revised tail lamps and a thick chrome slat enhance the look at the back. The Aspire's interior is not entirely new, so it remains to be a well laid out, ergonomic, spacious and comfortable cabin. But Ford has made some significant changes to help distinguish it from its predecessor. A similar beige and black dual-tone theme is carried forward, but the seats have now been restyled to offer better support. And they are comfortable too even if they are not adorned in leather. The dashboard has also been revamped with a new 6.5-inch floating touchscreen system. This unit is similar to the one seen on the new EcoSport and Freestyle. Even so, the Aspire still misses out on a rear air-con vent which is on offer on competitors like the Maruti Suzuki Dzire and Hyundai Xcent. 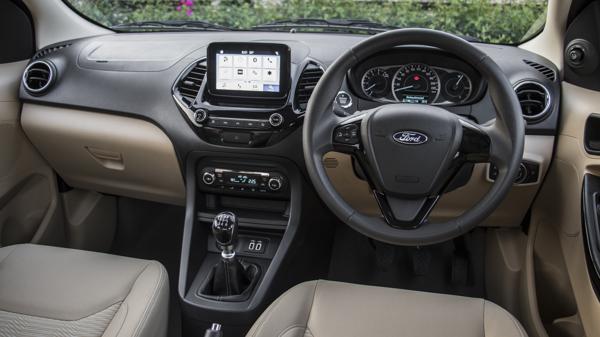 There are neither seat back pockets nor bottle holders on the rear doors. On the other hand, the 6.5-inch touchscreen unit provides quick access to Ford's new in-car connectivity SYNC 3 system. This is equipped with Apple CarPlay and Android Auto, and is very easy to use. Moreover, worth a mention are the upmarket features like an engine start-stop button, auto climate control and illuminated USB sockets. On the safety front, dual airbags and ABS now come as standard across the Aspire range. But what gives the Aspire an edge over its rivals is that it's equipped with electronic stability program (ESP) on the top variants and the new SYNC 3. This one, like before, has the Emergency Assistance feature to notify the nearest hospital in case of a collision. The 1.2-litre Ti-VCT petrol engine from the predecessor is now replaced by an all-new, Dragon petrol motor that debuted on the Freestyle. This three-cylinder, 1.2-litre Dragon petrol mill produces class-leading 95bhp of power and 120Nm of torque. There's also a new five-speed manual gearbox that is standard even with the diesel engine, which we will talk about in a while. Let’s first get to the petrol. We tapped the engine start button and the powerplant started without much of a noise. The idling is silent and the refinement is good enough for a three-cylinder mill. Start moving, say from standstill and you realise the low-rpm throttle response is ordinary. The surge only starts to come above 2,000rpm otherwise below that, the punch (torque) feels weak. However, as you speed up, you realise it has enough pep to push the car. Above 4,000rpm is where I’d like it to be. Use the gearbox judiciously and the engine performance feels not just acceptable but on par with segment standards. Of course, as you accelerate to higher rpms the three-cylinder thrum becomes audible. The tyre noise also seeps into the cabin when doing three-digits speeds. The diesel, on the other hand, gets the tried-and-tested 99bhp 1.5-litre four-cylinder TDCI motor. The mild clatter is still there but with 215Nm of torque; this one allows the car to putter around the city in third or fourth gear at 30-40kmph, without the engine lugging at all. Overtaking slow moving vehicles doesn't make you feel nervous and you can take on the highways easily thanks to its good mid-range with torquey nature. The performance also starts getting stronger as the rpm needle climbs, while cruising at triple-digit speeds remains to be a breeze. Then, the highlight is the new five-speed gearbox with short throws and well-defined gates. There's no notchy feel in the shifts and that makes it a slick transmission to use. This, along with a light clutch with short travel, makes it great for the city. Furthermore, the steering at parking speed is light and weighs up nicely with increase in speeds. It is direct and quick to react making things easier within the city. The compact sedan continues to feel very chuckable and even around tight corners handling feels safe. There's minimal body roll too. Another pleasing aspect is the Aspire's flat ride with a suspension tuned for compliance. Ford has managed to tune the hardware very well for Indian driving conditions. Broken tarmac and undulations are well absorbed without any bumps even for rear passengers. We took some sharp bumps and the suspension managed to cushion these without making much noise. Again, straight-line stability is on par for the course without giving any light or wafty feeling even above 150kmph. Additionally, the brake pedal doesn't feel mushy to use and drops the anchor fast with a quick grab action. Ford has played their cards well with the Aspire facelift. Its looks are a differentiating point, cabin is well designed and reasonably spacious with some new equipment. However, it still misses out on some basic features like DRLs, projector headlamps and rear AC vents, which have now become a norm in this compact sedan segment. Nonetheless, the Aspire nails the spot with class-leading safety equipment, most powerful engines in segment, excellent driving experience and prices lesser than its outgoing model. It's also competitively priced between Rs 5.5 lakhs to Rs 8.14 lakhs (ex-showroom) undercutting the Maruti Suzuki Dzire and the Honda Amaze by good margins. An Aspire to aspire for then then? The on-road price of the Ford Aspire in Delhi starts at ₹ 7.28 Lakh for the petrol engine. Meanwhile, the top end model (Aspire Titanium Plus 1.2 Ti-VCT) with petrol engine is priced at ₹ 7.63 Lakh.

The on-road price of the Ford Aspire in Delhi starts at ₹ 8.38 Lakh for the diesel engine. Meanwhile, the top end model (Aspire Titanium Plus 1.5 TDCi) with diesel engine is priced at ₹ 8.73 Lakh.

The ARAI reported mileage of Ford Aspire is 18.5 kmpl.

No. Sunroof is not available in any of the 4 versions of the Ford Aspire.

Yes. There are 2 Aspire versions with diesel option.

Ford Aspire top version is Titanium Plus 1.5 TDCi. It is priced at 8.73 Lakh in Delhi.

Note: Specifications for Aspire Titanium 1.2 Ti-VCT have been mentioned 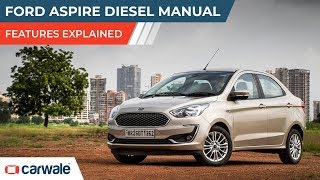 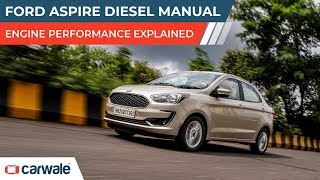 Ford Aspire gets a new design for alloy wheels A special Edition Ford Aspire Blu has been spotted on test outside Ahmedabad (where Ford&rsquo;s Sanand factory is located). Pictures indicate that it is a special edition of the American Ford Aspire facelift launch within the next few months

A facelifted version of the Ford Aspire is expected to be launched very soon for the Indian market. It&rsquo;s the first major update for the American automaker&rsquo;s compact sedan since its launch

Ford has launched a CNG compatible version its Aspire compact sedan. There are two variants-Ambiente and Trend Plus and they are priced at Rs 6.27 lakhs and 7.12 lakhs. Ford Aspire CNG launched in

A few days ago, we went into detail about an updated version of the Ford Aspire compact sedan. Besides that, leaked images from what appears to be a dealership put us right on the money in terms of