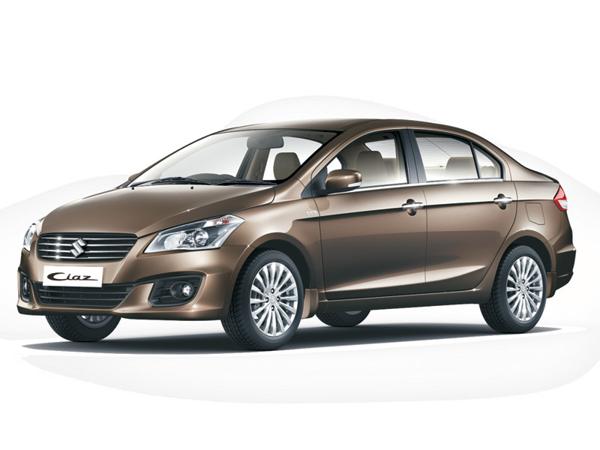 For the first time in the brand’s history, Maruti Suzuki attempted making an elegant and upmarket sedan and to a great extent, they succeeded too. The front of the Maruti Suzuki Ciaz has a wider stance with larger headlights. The intricate detailing inside the headlight makes it look interesting with projectors as well as multi angle reflectors embedded in it. The same feel is carried to the side wherein it gets a shoulder line that dominates the silhouette. Maruti Suzuki offers 16-inch wheels with multi spoke alloys giving it an equally premium side profile as the front. Also, making the glass area on the side looked stretched evenly; the pillars have been deliberately blackened. To the rear, one would find large well placed tail lights again for that necessary elegance and poise. The bumper on the rear with its scooped out sections reminds of the Kizashi.

The new Fiat Linea received an update in the form of a smarter front and rear, though the overall shape and dimensions were retained from the earlier version. Among the changes, the front bumper was revised with a grander feel and chrome embellishment along with a resurfaced front bumper. The new changes on the Fiat Linea made it look more elegant than before making it loom unique for its segment. Even the headlights were updated with more effective reflectors for better illumination at night. The side was left intact as the strong shoulder line running along the silhouette did not demand any changes whatsoever. To the rear, there is a wide chrome strip neatly placed on the tail lid along with a brand new LINEA logo nicely embossed on the top of the lid.

Happily, the interiors of the Maruti Suzuki Ciaz are equally expressive as the premium exteriors. The Ciaz doesn’t only offer premium line of features and layout but also is as grand in space making it one of the most spacious kinds in its segment. It makes use of rich quality of veneers, fabrics and textures to make it look distinct from its overall portfolio of models. To make the cabin feel more airy, it gets bright coloured leather seats done in colours of creamish beige. The most impressive aspect in the Ciaz has to be its rear passenger space which is grander to the extreme. Taller passengers will be completely floored with this as there is more than sufficient knee room and leg room in this area. It also gets rear passenger AC vents to make sure it doesn’t take too long for the rear passengers to get cooler air.

Present day cars are all about features and options and Maruti Suzuki couldn’t be left behind as they have equipped the Ciaz with some of the best in class features which has also been aped by some of its rivals now. For ease of operation and comfort, there are steering mounted controls, automatic climate control, touchscreen infotainment system with navigation and rear park assist and electrically adjustable exterior mirrors. In addition, the Ciaz also offers keyless entry and a retractable rear windscreen blind.

The inside of the New Fiat Linea was completely revamped compared to the earlier version as the entire focus was shifted to premium occupant comfort. The instrumental cluster has lucid display of numbers along with the necessary piece of information regarding driving conditions and to the centre lies the infotainment which gets a piano black surround engulfing it. The AC vents above that too are finished in rich glossy layers of plastic and they have a utility zone above with a cover. The beige and black combination of front dashboard layout looks very plush.

In terms of comfort, the Fiat Linea doesn’t disappoint at all as it gets perforated leather seats finished in beige cream. They are definitely not easy to maintain but at the same time lend a cushy feel to the occupants robbing of any fatigue caused while driving on highways and city conditions. The deeper slotted cluster makes It a bit uneasy for the driver but then the overall comfort of the Linea is impressive. Not just that, it also gets modern elements like automatic headlights, automatic wipers etc but then loses on certain essentials such as park assist.

Maruti Suzuki Ciaz is offered in both petrol as well as diesel variants. The petrol variants make use of a 1373cc motor that produces 90bhp at 6000 rpm and 130 Nm of torque at 4000 rpm. This engine is offered with a 5-speed manual and well as 4-speed automatic transmission units. As officially claimed, this motor delivers 20.73 kmpl for the manual transmission and 19.12 km/l by the automatic transmission model. The more popular diesel powertrain utilizes a 1248cc motor that churns out 86 bhp of power at 4000 rpm and makes a meaty torque of 200 Nm at 1750 rpm. This motor makes use of a 5-speed manual transmission. This motor also happens to be most efficient in its class at 28.09 km/l, thanks to its Smart Hybrid Technology which uses an Integrated Starter Generator.

The diesel motor is the same as seen on many popular cars in India. The NVH levels are not very impressive considering the fact that the diesel clatter tends to enter the cabin at higher revs. Even though, the motor has been properly tuned to make sure it hauls a sedan of these dimensions, there is evident turbo lag at initial engine speeds. This makes it uncomfortable in city driving conditions. To aid this, the shift quality has been changed but still lacks the finesse where its rivals score more. The petrol unit however is more suitable for such short commutes as it is rightly tuned for an immediate response. The power delivery is very linear making the motor revv with a smooth response. However, this engine is not much of a please on highways as it needs to be constantly revved.

Powering the new Fiat Linea are two impressive units. Firstly, the petrol variants make use of a 1.4-litre T-Jet motor that makes 112 bhp at 5000 rpm and 207 Nm of torque at 2200 rpm. Officially, Fiat claims that the new Linea petrol delivers 15.7 km/l. Secondly, the popular 1.3-litre Multijet diesel, which also happens to power most of the offerings starting from a regular hatch to premium mid size sedans, makes 91bhp of power at 4000 rpm and 209Nm at 2000 rpm. This one delivers an official mileage of 20.4 km/l. Both these engines occupy a 5-speed manual transmission.

Clearly, the power output of Fiat Linea is not the best in the segment because it rivals the likes of Hyundai Verna and Honda City, both of which sit very high with impressive numbers. However, to Fiat’s benefit, the Linea has been tuned to offer greater driving pleasure. The motor feels refined and the transmission too offers smooth quality of shift, the two quintessential for good driving. The T-Jet petrol motor behaves very contrary to the diesel as it revs freely and gives enough confidence to be belted to extreme limits on highways. In fact, the motor is so good that a further tuned version powers the Abarth Punto Evo.

Since the petrol Ciaz is lighter than the diesel variant, it offers a more agile ride. This comes as a major boon while handling city traffic and to support the same the smooth petrol motor revs confidently at the lower range. The light steering wheel helps easy manoeuvrability of the car inside the city. While the benefits and merits are totally felt inside the city, on highways it is almost a curse since the vague steering input is the last thing you wish for.

The suspension setup too doesn’t really work in tandem as the cushy springs do not feel reliable on high speeds. The diesel too doesn’t fit the bill of being a joy to drive. It lacks the joy and pleasure of its European rivals but is definitely better than the Hyundai Verna and Honda City. The only area where it feels at home are the highways where the motor gets into its real spirits.

This is a dimension where Fiat cars have always been very strong and the new Linea too endorses the same with great confidence. Yes, we did mention of the motor not churning impressive numbers but the quick agility of the Linea with its direct steering input makes it a brilliant performer on both city and highway driving. The suspension setup which makes use of an independent unit on the front wheel along with a torsion beam for the rear make it take rough sections and undulations with a superb capability. The Linea sits on a taller ground clearance of 190mm but the same doesn’t act as an hurdle while handling the vehicle around corners. 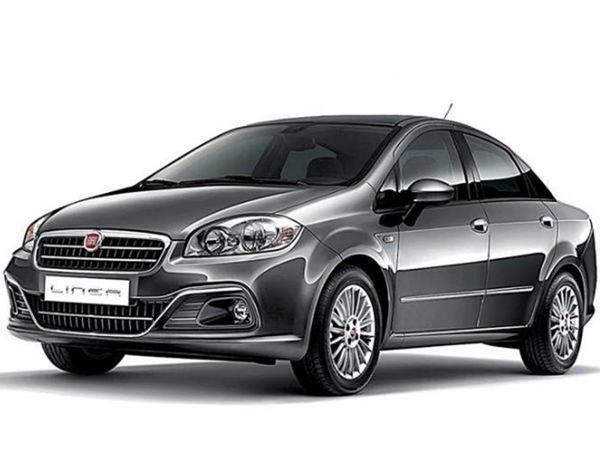 Unlike typical large dimensioned cars which are severely discomforting on high speeds and sudden manoeuvres, the Linea behaves like a thorough breed offered with a well set confident ride and handling package. Further aiding the confidence feel, the Linea also occupies great set of front and rear brakes which have enough bite to bring the car to a standstill from extreme speeds.

The Ciaz has been positioned as a premium sedan and the efforts and detailing gone into making and promoting it speaks loudly of the company’s intention to not slot this near to its other budget offerings. The petrol Maruti Suzuki Ciaz is priced at Rs 7.79 lakhs for VXi MT and it goes all the way upto Rs 9.68 lakhs. The automatic variants are priced between Rs 9.48 lakhs to Rs 9.7 lakhs. The Smart diesel hybrid variants are priced between Rs 8.76 lakhs to Rs 10.93 laks. All these prices are ex-showroom Mumbai.

The new design of the outside along with modern additions makes the Fiat Linea an impressive offering. Inside, the interiors have been updated to make it feel as strong a contender as its rivals. The ride and handling too scores impressively but overall the Linea doesn’t feel as new as the competition as other manufacturers have switched to a new platform while the Linea is still a refurbished offering on the earlier platform. The price of new Fiat Linea for the petrol variants lay between Rs 7 lakhs to Rs 9.77 lakhs while that of diesel variants are between Rs 8.67 lakhs to Rs 9.99 lakhs. All these prices are ex-showroom.

The Ciaz is the best value for money product that your money can buy. Don’t look any further than this.

Mahindra TUV300 Vs Hyundai i20 Active