The Figo marked Ford’s entry in the bread butter small car segment in India. Before, Figo the Ikon was one of the most popular models sold in the country. However, the hatchback market which a favorite was enjoying dominance by India’s favorite Maruti Suzuki. The Figo was launched in 2010 and since then there was no looking back. A car with all features and a very attractive price were the main USP for the Figo. The Ford Figo is available in both petrol and diesel engine trims. It is priced between Rs. 3.93 lakhs to Rs. 6.11lakhs.

The Maruti Suzuki Swift was launched in 2005 and it saw the same success as the iconic 800 in the premium hatch market. The sales of Swift kept in rising. Maruti also was very serious about the Swift and kept on updating it from time to time. A new generation Swift is also on the card soon. So far, the car has been receiving an overwhelming response from the Indian buyers and more than 5,00,000 units of this car have already been sold in the country. It is priced between Rs. 4.75 lakhs to Rs. 7.23 lakhs

The Figo was saw its last transformation in 2012 saw new 14 inch 8 spoke alloy wheels which indeed adds a sporty touch in addition to the sloping roof rails on the top. Although there are minor tweaks on the car, the basic design has been retained.

Coming to the rear, the tail-lamps too have been bedazzled with some artistic treatment. The new design also assures of a better visibility of the tail lights for the cars following. So overall, Ford gave the Figo the small makeover it required essentially. The mid life facelift is to keep the car afresh with all its competitors. Also, Ford had introduced new 2 shades on the Figo the Bright Yellow and the Kinetic Blue.

The Maruti Suzuki Swift on the other hand set a new trend by Maruti as before the Swift, the company did not have an impressive looking car. The Swift with its long stretched hood, pulled back headlamp design makes it a good looking small car. The Swift borrows certain cues from the cult classic Mini Cooper. The new generation Swift has got wider and bigger than its predecessor. The basic variants feature 165/80 R14 steel wheels which have been fitted in LXi, LDi,VXi, and VDi versions, though the basic version comes with hub center cap while the higher variant with full wheel cap. The top variant features 185/65 R15 alloy wheels, with center cap.

The feel inside the cabin with the same instrument cluster is the same however the new cabin feels a bit refined and noise free compared to the earlier version. The New Double weather strip cancels the redundant noise and offers lower NVH levels.

The all new Ford Figo cabin boasts of new headrests as well as better lumbar support for the front row of seats. Headroom and the legroom inside the cabin remain uniform and is very spacious. Because of the sloping roof, the rear headroom may be an issue for taller passengers.

The Swift comes with a K series Petrol engine with VVT. This is a 1197cc engine which produces a power of 87PS as 6000 rpm and a torque of 114Nm at 4000 rpm. It is metted with a 5 speed manual transmission. There are many who vouch for the petrol unit’s performance and claim this is the best in its class. The 1248cc DDiS diesel engine churns out 75 PS of power at 4000 rpm and a torque of 190Nm at 2000 rpm. Maruti Suzuki does not provide an automatic transmission. 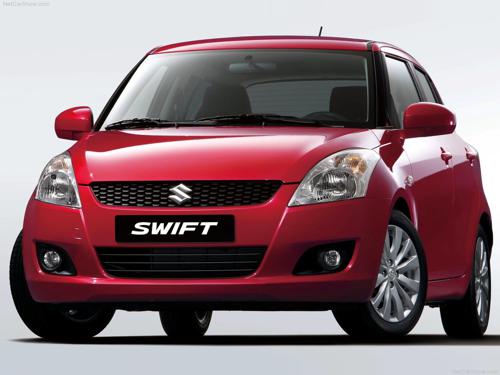 The verdict on these two is not an easy one as both cars have their own pros and cons. The Swift has the pioneering advantage and also it comes from the house of Maruti Suzuki which is a synonymous name in every household as there is barely anyone who hasn’t heard of it. The Swift also commands a fantastic value in the used car business.

The Ford Figo is priced economically when compared to the Swift. The new Ford Figo with its additions and enhancements will appeal to the family looking for a compact hatchback with a premium feel. Premium features, spacious cabin and a smooth engine make the Figo a strong player and assure Ford’s dominant position in the small car segment