The Aria remains to be the flagship model of Tata Motors wherein the Endeavour is the premium offering from Ford in the SUV market. Aria is considered to be a breakthrough from Tata Motors as it was the first crossover by the company packed with advanced technology and a smooth engine but then its enthusiastic pricing went against it.

Aria was compelled to see dark skies as Mahindra XUV500 offered more than the crossover and at an affordable price point. Ford Endeavour on the other hand also could not sustain growth as the Fortuner made a dent in its sales. Along with the Fortuner, the recently launched SsangYong Rexton and Mitsubishi Pajero Sport have also hampered the sales of this SUV from Ford.

Let’s find out how the flagship SUVs from both the companies fair against each other.

Launched in 2010, The Aria boasts of a crossover design. The concept was launched in Geneva in 2006 and it took a good 5 years for the Indian company to come up with a production version of the same. The Ford Endeavour which is also known as the Everest in some markets is a hard core 4x4 SUV which can be thrown on challenging surfaces. 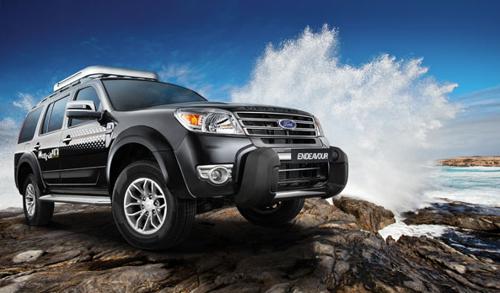 While the Aria sports the Tata Indica, Vista and Nano family front face, the Endeavour sports a chunky fascia with relaxed headlamps. The Ford Endeavour recently got a facelift which was not substantial but softening of the edges on the body. Even when seen from side, the Aria has a flowing roofline while the American beast sports straight lines and no unnecessary chunks. Rear profile of the Aria has the strip vertical tail lamps which again is a family design attribute while the Endeavour has been slapped with a spare tyre on the tail gate with oodles of aggression.

Just like the robust exteriors, the interiors of the Ford Endeavour too have lots of straights and squares. With the upmarket quality of materials used, the cabin feels a lot premium. Since this is a big vehicle the cabin space inside is as generous as it gets in any SUV of this segment.

Crossover Aria, which is a combination of an MPV, sedan and a SUV has a mix and match of all the segments. The Front Seats are Large, though perhaps a bit on the harder side. If you are going to be travelling long distances in the Aria, I am sure you won’t be complaining. Our Press car had high quality Leather upholstery in a 2 Tone Black & Plum Shade (the other options available are Black & Black and Black & Beige). The Driver’s seat is Height adjustable and even the lowest setting is quite high, giving an excellent view of the road. The Aria also has height adjustable seat belts. Though it boasts of a feature rich cabin, the quality of plastics used can be little discouraging.

The Tata Aria comes with the same 2.2 litre DICOR engine that does duty on the Safari. The engine produces 140 PS of power @ 4000 RPM and has healthy torque figures of 320 NM between 1700 – 2700 RPM. This is much needed, considering the 2.7 Tons of weight that the engine has to move around. Refinement levels are in another league than the Safari thanks to the Dual Mass Flywheel in the Engine which not only reduces vibrations but also brings the NVH levels down. The Aria delivers a fuel consumption figure of 12 – 14 kmpl. 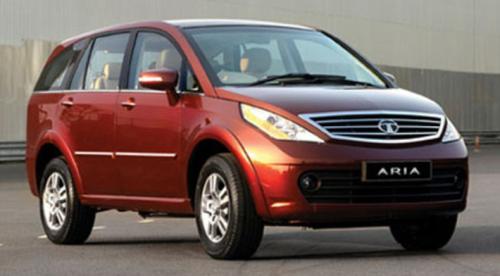 On the other hand, the Ford Endeavour has a 3L TDCIdiesel unit which produces a power of 156PS at 3200 rpm and a torque of 380Nm. The Ford Endeavour may not be the smoother of the one in its segment but then it manages to impress with its hardcore SUV potential. The American unit is also fitted with a Variable Geometry Turbocharger (VGT) which manages to squeeze out the best from the beast. The Ford Endeavour gives a real time mileage of 10.7kmpl.

The Tata Aria is no doubt a decent product but the only thing that goes against it is its pricing. The Aria faces some stiff competition by the segment leader Toyota Innova as well as Mahindra XUV500 which is Mahindra’s most aggressively marketed vehicle. There are news doing rounds of Tata Motors re-launching the Aria brand as well as offer more options by bringing a sub compact SUV based on the Aria.

The Endeavour, sticks strong and its off roading capabilities is its selling point. Saying all that, the SUV market has got new entrants in the form of SsangYong Rexton and Mitsubishi Pajero Sport which offer more features and also priced considerably lower than the American beast. The Endeavour shall be getting an upgrade soon under the intention of recreating the magic it had earlier.