The Chevrolet Sail, a Sedan from Chevrolet, was launched in India in Jan, 2014. Chevrolet Sail Sedan has been discontinued in 2018. We are showing the last known price for Sail Sedan.

Chevrolet has not been very successful in the Indian car market but then they are trying hard to be a strong player. The Cruze, which is a segment leader in the D segment, is the only car which is doing decent numbers.

However, the low may not be there for long as the company has some ambitious plans for India. They recently showcased their compact SUV concept, Adra, at the 12th Auto Expo in Delhi and it received great response. Apart from the Adra, even the Beat facelift was launched at the same venue which now sports the new bow tie grille.

Part of the revamping strategy, Chevrolet launched the Sail U-VA hatchback and Sail sedan to take on competition. The Sail sedan marks Chevy’s re-entry in the mid-size sedan segment which is primarily led by DZire and Amaze. While it does not boast of an exhaustive features set, the Sail promises to be a practical solution for daily commute. We explore it in different sections of our review.

The Sail sedan similar to its hatchback sibling does not look wow from any angle but then it comes across as a decent looking car. The bow tie grille dominates the front and it also gets sweep back headlamp design. The bumper looks very cheeky with subtle profile on the lower section.

Till the B-Pillar, it is very reminiscent of the U-VA but the real difference starts post the B-Pillar. There is a strong shoulder line running on the side profile and the C-Pillars gradually flow down to the boot. It also gets 8 spoke 14” alloy wheels on the top trim which is attractive. The rear overhang is very evident and it does look rear-heavy.

The rear profile is very simple with bare minimum. It does manage to conclude the design in a nice way. The best aspect of Sail’s design has to be the balance maintained in the overall profile. The DZire, which seems to have a retro-fitted boot. Looks totally out of proportion but then the Sail does not look a quick-fix job.

The Sail is a very simple looking car built for a purpose. It may look dated to some because of lack of jazzy lines or sophisticated creases but then it manages to look presentable from outside.

It has a four speed AC but then the AC takes its time to cool the cabin. This is not cause of the AC capability but Mumbai heat which can get very challenging at times. We often were using the AC at its maximum speed to cool the cabin.

The glove box is not generous when it comes to gulping articles but miscellaneous paper tickets can find its place there. There are bottle holders on front doors. On the central panel, there is a very smart interim recess which can take a phone as big as Samsung Note. The rear passengers get one cup holder located just after the hand brake.

The music system offers good playback quality. It has a 4 speaker output range with 2 speakers placed in the front and 2 at the rear. The speakers perform well till upper mid range as when the frequency hoes in higher ranges, the speakers give up on quality. The music output can be adjusted for different Bass, Treble, Fader and Balance levels. It also offers an option of pre-saved equalizer options.

The steering wheel feels nice and confident. It however does not offer any sort of controls on it and this you have to reach for the actual controls every time. One more hassle is the power window buttons since it’s a row of them it often happens that you end up sliding up/down the wrong window. These buttons are too closely placed with each other. The ORVM adjustment button has a very neat arrangement.

Mechanically, Sail’s engine remains same as the U-VA. We drove the diesel variant. 1.3L SMARTECH Diesel engine, which has a displacement of 1248cc produces a peak power of 78 PS at 4000 RPM and a torque of 205Nm at 1750 RPM. It is meshed with a 5 speed manual transmission.

Power delivery is not quick enough and it takes time for this 1.3L engine to generate enough power to make the drive feel interesting. Like many other cars in this segment, the Sail too is at its best in mid range engine speeds. Post 2000rpm there is ample speed to play around with. Even overtaking does not take efforts.

Even though it feels torquey, it does not manage to hold ground firmly at high speeds. In fact, crossing 100Km/h is a task indeed and the diesel motor barely sticks on to high speeds. The rattle gets evident and the steering too loses on giving precise feedback.

On the highway, the Sail might not “sail” in the smoothest way but then inside City is where one can enjoy it. It is a fully grown sedan specially when you compare it to the hatch but even then manoeuvring it is very easy. The 14” tyres provide sufficient grip to hold on to the tarmac. It also gets decent suspension dampening. The Amaze scores more in terms of suspension, ride and handling but the Sail is not disappointing.

Overall performance of the Sail is very much like a daily commuter. City commuting will not be an issue at all. Even with the car occupied completely, it did not have any sort of lag. The power delivery could have been better at higher engine speeds.

It has a simple yet smart design and spacious interiors. The area where it scores low is the cabin does not feel premium and the passenger engagement with the car is very less. Dimensionally it is bigger than competition especially the DZire and Amaze but then the latter offer better quality interiors and a more efficient engine. Thus, if you need a decent looking car with spacious interiors and at a decent price, the Sail sedan can be a good option.

Find a list of all 4 petrol and 4 diesel versions of Chevrolet Sail. This table includes on-road price which covers all costs like RTO and Insurance.

Launched in 2013, the Chevrolet Sail sedan replaced the ageing Aveo in India. The saloon received positive feedback initially, but its sale started dropping due to rising competition in the segment.

With an aim to boost its sales, General Motors introduced the facelift model in 2014 with minor exterior and interior updates. However, there were no changes made to both the engines - 84.8bhp, 1.2-litre petrol and 76.9bhp, 1.3-litre diesel. The sedan is one of the most fuel efficient Chevrolet cars in India, that delivers a mileage of 18kmpl (petrol) and 22kmpl (diesel). The new model looks similar to the old one, however, there are few minor updates such as modified headlamp, new alloy wheels, chromed fog lamp, rear and boot lip with a chromed strip and revised tail lamp. The changes go more apparent when you step inside the car. The new black and beige dashboard, chrome surrounded gear knob and AC vents, 2-DIN audio system and new leather-wrapped steering with black finishing enhance its comfort-level and entire appearance. The mature and agile suspension delivers a smooth and composed ride. The city drivability is quite impressive, but highway performance could have been slightly better.

Further to this, read Chevrolet Sail Road Test details by our expert.

With minor exterior updates, the saloon looks identical to the old model. At the front, it features modified headlamps, new alloy wheels and chromed fog lamp. While, the rear profile features rear and boot lip with a chromed strip and revised tail lamp.

The sedan received significant changes inside as well in the form of new black and beige dashboard, chrome surrounded gear knob and AC vents, 2-DIN audio system and new leather-wrapped steering with black finishing. Most Chevrolet car models are known for their interior comfort and features, and the Sail is no exception.

The sedan’s diesel engine is very frugal and peppier than the petrol one. The power delivery is linear that gets strong after 2000rpm. The gear ratios are good for city driving. It’s among the most fun-to-drive Chevrolet cars in India. However, there is some body roll at corners. The petrol version is capable of achieving 0-100kmph in 12.9 seconds, while the diesel variant takes 11.9 seconds. The ride is very composed, thanks to its agile suspension with linear dampers. The handling and drivability are pretty impressive.

The stopping capabilities of the sedan are strong. It is equipped with disc brakes on the front axle and rear drum brakes. ABS (Anti-lock braking system) with EBD (electronic brake-force distribution), available only on top-spec model, further enhance its braking capabilities. The brake pedal feedback is progressive.

The 1248 cc Diesel - powered variant delivers a fuel economy of 20 kmpl in city and 22 kmpl on highways, while the Petrol variant offers a mileage of 16 kmpl on urban roads and 18 kmpl on freeways, respectively.

The Chevrolet Sail isn’t a car for enthusiasts, but it’s a complete package for buyers who want a practical and easy to drive family car.

Chevrolet’s Sail is a proper sedan with simple and neat design and a well-equipped interior. However, it isn’t comfortable and good at handling as the Honda Amaze. The Amaze is a more practical and powerful than its rival. Its drive is engaging, and the ride is relatively smoother than the Chevrolet’s saloon.

Chevrolet Sail, a Sedan, is available from ₹ 5.30 - 7.73 Lakh in India. Chevrolet offers the latest Sail in 8 versions in India. The base model 1.2 Base starts at ₹ 5.30 Lakh in Delhi and the top model 1.3 LT ABS priced at ₹ 7.73 Lakh in Delhi. If you are looking for 5 seater car then you should consider Sail. 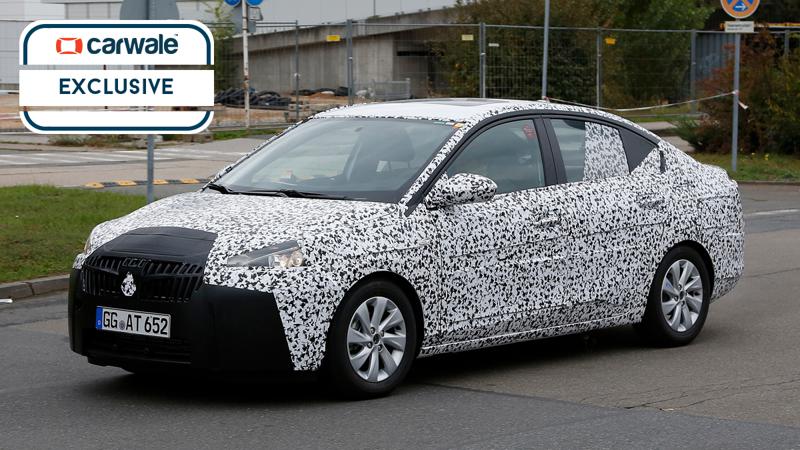 A heavily camouflaged Chevrolet Sail Sedan has been spotted doing the rounds in Europe ahead of its expected debut late next year. This will be sold with the Chevrolet badge in China but with the 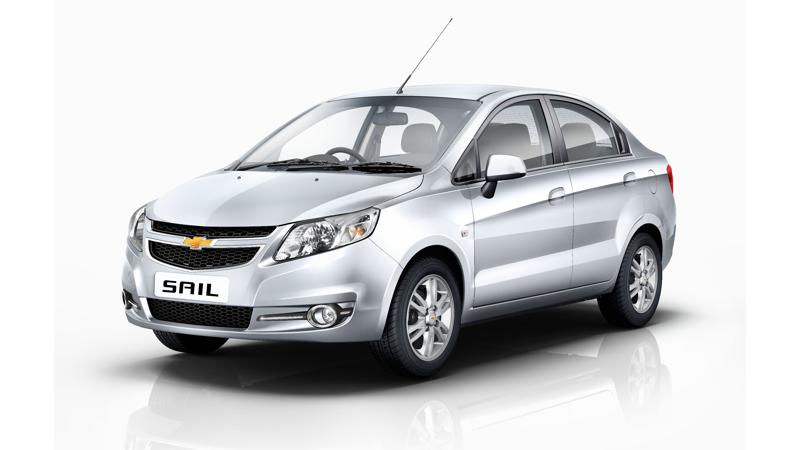 The sedan Chevrolet Sail has become quite popular in the category of sedans in the country. Be it in the aspect of performance, appearance or technical specifications, this car has become the talk 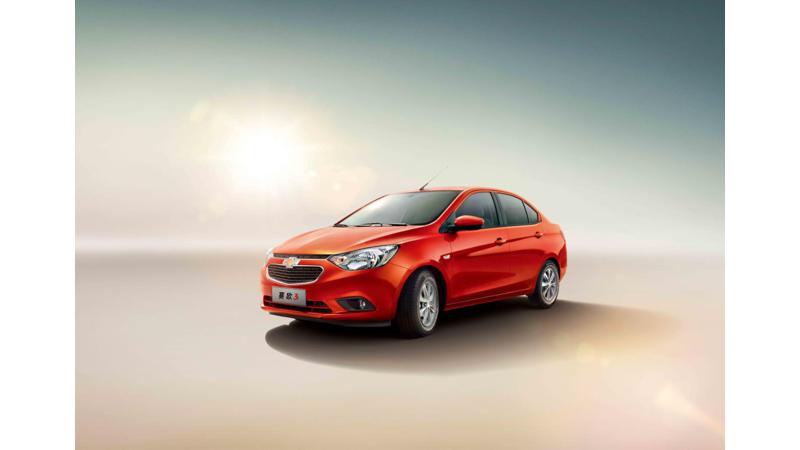 General Motors has unveiled the new generation Chevrolet Sail sedan at the 2014 Guangzhou Motor Show in China. This sedan gets several upgrades to both exteriors and interiors, and the mid-sized

General Motors has launched the next generation Chevrolet Sail 3 Sedan in the Chinese market. The vehicle is offered in a total of five variants and two engine options. The new Sail gets

New Chevrolet Sail may be launched in India sometime in 2015

Visitors at the 2014 Guangzhou Motor Show in China were awestruck with the first glimpse of Chevrolet&rsquo;s Sail sedan. It is likely that the showcased trim may also make it to the Indian market