Mahindra cars in India have long had a strong fan following spanning across entire generations of families. Primarily known for their tough, go-everywhere SUV’s, Mahindra has also invested heavily into the alternate powered car market. 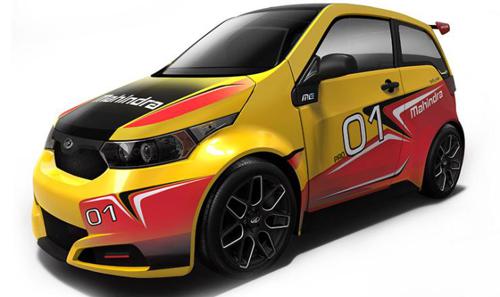 The e2o is a two-door hatch that’s powered solely by electric propulsion motor, thereby being one of the first cars in India to be free from frequent trips to the fuel station. Designed to seat four, it is touted as a urban hatchback that runs purely on batteries which can be recharged via a regular power-socket at home.

The e2o in its current avatar was a bit staid and lacked the necessary oomph to make a larger impact. Enter the Mahindra e2o sport - a hotter, sportier version that promises to change the way you’ll look at electric cars in India.

Debuting at the 2016 Auto Expo that was held in Delhi earlier this year, the e2o Sport showcases the growing prowess of Mahindra cars in India. The ‘Sport features a low & wide stance that’s instantly sporty, as well as a aggressive, thanks to the specially designed body kit. The manufacturer put a spoiler on the back and even gave the car wider & low profile wheels shod with grippy rubber. All-round disc brakes make their debut here.

The interior on the Mahindra e2o Sport too has been suitably kitted out. So you get race inspired bucket seats complete with a six-point harness system in place along with a steering wheel from experts, Momo.

The e2o Sport isn’t all show and no go either. In a welcome move, Mahindra have worked upon the car’s performance and the diminutive car develops significantly more power than it did in its regular version. In-fact, from the 19 KW on the regular T2 version that is on sale currently, the e2o in Sport variant develops a massive 105 KW of power. The car has received a huge boost in the torque department as well. It now develops 180 Nm torque, a whopping 125+ NM jump here. All these powerplant upgrades mean that the car goes from a top speed of 80 km/h before, to about 120 km/h. This alone should ensure that the e2o Sport will be able to cruise at highway speeds.  Besides, the car now does the start to 60 km/h in 4 seconds, and the ton coming up in 10.

How To Choose Your Car Battery?