Priyanka Chopra’s mercurial journey from winning a beauty queen to one of the top grossers in Bollywood has been the stuff that tinsel-town dreams are made off. The spunky actress has essayed a wide range of roles throughout her film career. She’s even made a mark overseas, in the US market, where she’s now a regular fixture of television & Hollywood circuit. 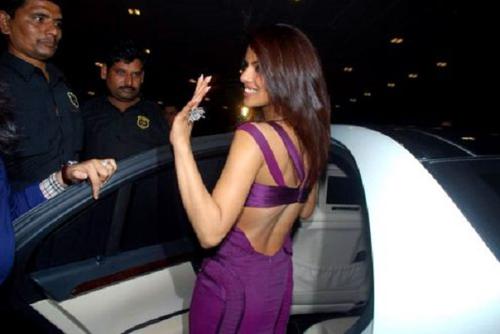 Priyanka chopra with her car

The vivacious actress wowed audiences around the world with her appearance at the prestigious Oscar Awards ceremony. Making her debut there, Priyanka rocked the red carpet, looking stunning in her white strapless gown, by famed designer, Zuhair Murad.

In-fact, her long standing love for the colour white is known to extend to other aspects of life as well. Priyanka Chopra’s cars for example, are known to sport her favourite colour. She’s known to have quite a few of luxury wheeled beauties in her garage but the one we’ll take a closer look today is her S-Class.

Typically speaking, Mercedes-Benz cars in India have been held in high esteem, with the who’s who of the cognoscenti favouring the three-pointed star, when it came to choosing their steed. The S-Class is the flagship luxury sedan from the acclaimed German luxury car manufacturer, and a firm favourite among the movers and shakers of the world, since the day it was introduced decades ago.

The iconic car has gone through many iterations & even spawned multiple body styles, with coupe, drop-top convertible, full size sedan and a long wheelbase variant being the key ones that come to mind. The S-Class isn’t just a segment leader, but in-fact, an industry leader the world over. The car has gone on to cement the position of Mercedes-Benz cars in India at the top of the most luxurious and opulent automobiles list.

The car comes with a choice of a diesel V6 or a petrol V8 engine under the hood, with displacement ranging from 3.0 litres to 5.0 litres respectively. Power and torque output too vary accordingly with the diesel motor being good for 250 bhp & 620 Nm torque, while the petrol motor develops 450+ bhp of power & close to 700 Nm of torque! Not bad for a 2+ tonne luxury limousine capable of hitting an electronically limited top-speed of 250 kilometres per hour.

The S-Class is quite unlike the rest of Priyanka Chopra’s cars. It is the cocoon of luxury that insulates its occupants from the rough & tumble of the world, signalling to the others, that the occupant (s) are a cut above from the commoners around them. A world where they’re entitled to the best or nothing!

How To Flush Your Cars Radiator