The Audi Q7 has been the quintessential full-size luxury SUV in the past decade or so of modern India. It was the go-to SUV of choice for all those who loved their cars to be huge on space, size and image. Everyone from industrialists, to sporting greats & movie stars fell in love with the street presence, the dominating view from the cabin and the near-endless list of creature comforts of this brute. Since its launch in India, it went on to become a huge money spinner for parent Audi, and was by far, among the most successful models in the company’s line-up here. 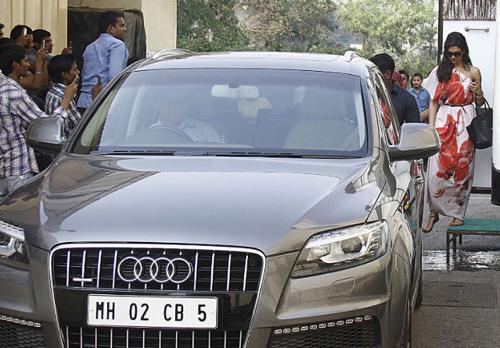 Deepika padukone and her audi q7

The Audi Q7 absolutely dwarfed others on the road. The competition and other, lesser valued cars respectfully kept out of the way, each time a specimen passed by them in the street. Passengers loved the higher headroom and increased space in the cabin. The luggage space too was better in the Q7. No surprise then to see the big Q7 becoming the firm favourite of car buyers looking for a full-size luxury SUV.

Deepika Padukone made her Bollywood debut long after the Q7 had been released in the market, but we reckon she’d have her heart set out on the SUV. The accomplished actress who made her debut to rave reviews and even went on to pick up an award for her performance has always been known to be a disciplined person who loves her cars. The Bollywood Diva has since then gone on to play many an acclaimed role, picking up accolades from industry folk, rivals and her fans.

Deepika Padukone’s Audi Q7 has been her trusted steed of choice, from the time she picked it up somewhere in 2011. Now, all of five years old, the car is due for a replacement and what better a choice than the new Q7 that has been launched recently. The new Q7 is sharper looking than the older one. Gone is the bulbous look of yore and the new Q7 sports a chiselled look. The interiors too have been spruced up accordingly and there’s more equipment on board, both, as standard as well as in the options.

Whether the new Audi Q7 manages to recapture the hearts of buyers, the way the older one did, is something that remains to be seen. After-all, there’s a lot more competition now, than there was in the past. But in the end, it all boils down to individual choices and you never know, if and when a lot more people, including Deepika Padukone herself, might end up opting for the Audi Q7, again!

Advantages And Disadvantages Of Electric Cars