One of the things that a lot of people can be found grumbling about frequently is the speed of their data connection on their devices. The way the world functions today, not having a fast, stable connection to the web is akin to missing an organ in most instances. At a time when information is everything, and even cars are looking to harness its potential to offer a superior motoring experience, our data connection quality leaves much to cry about. 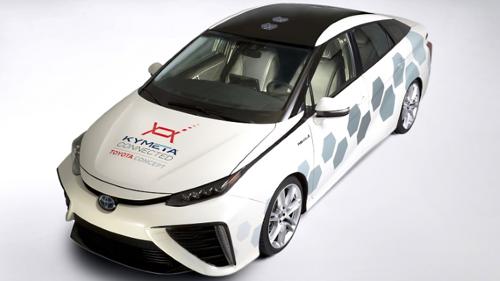 Thankfully, the future isn’t too far away where everyone will be able to get true-broadband speeds in an always-on connection, no matter which part of the world they go. At-least that’s what the satellite car from Toyota is dreaming up in a few years from now.

Toyota cars have always been at the forefront of the technology adoption phase, with the company offering advanced products like the Prius and hybrid versions of the luxury flagship, the Camry Hybrid. So when word trickled in that Toyota was putting its might behind satellite connectivity to solve the broadband problem when on the move, those in the know, weren’t quite surprised.

When it comes to the world of broadband data connections, a direct link up to the tech-umbrella array in the sky is a purists’ dream! The satellite car from Toyota is based on their Hydrogen Fuel Cell Vehicle (H-FCV) – Mirai (an apt name, considering, it means, the ‘Future’). Unveiled earlier last month, at the Motor Show in Detroit, the prototype evoked a collective gasp from all those gathered there.

It utilizes a system of six-sided antennas embedded into the roof & engineers from the Toyota cars division working on this project reckon that speeds up-to 50 Megabits/second have already been achieved. They’re now targeting speeds of up-to one Gigabit/second going by the way things are progressing.

Toyota’s future predictions for this technology include everything from vehicle software system updates on-the-fly, to infotainment downloads for real-time viewing in ultra-high definition. While still a long time away from being a full-time reality, the mere promise of the technology is enough to turn everyone into geeks on a data-high. The sheer length & breadth of the possibilities is so immense, that it stuns the mind into a slowdown as it struggles to take in the future all at once. Not unlike data connections today, which promise a lot, but fail to deliver as & when they’re supposed to.

Dos and Donts of Car Insurance