Think of the sun-visor in a car and what comes to mind is a vinyl/leather covered flap. Hinged at one end, it was parked along the top of the windshield, above the occupant’s head. Its sole purpose was to block out the sun, when driving down the street, thereby making everything visible despite the oncoming glare. For years, that is all that they did and everyone was happy about it. 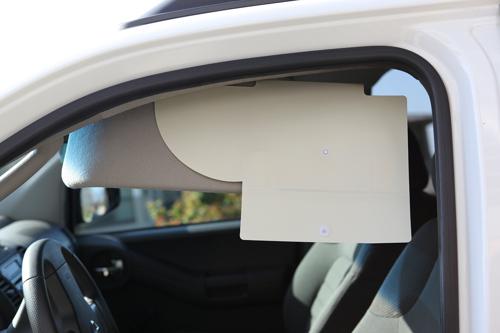 Then, one day, the whole movement towards featuring automobile technology in new cars started & life would never be the same again. Somewhere along the way, the humble sun-visor began to go upmarket – just like the cars it was to be featured in. The fittings and coverings got fancier. Small mirrors and slide-in storage slots began to make an appearance. The mirrors went upmarket, gaining backlights and all. Sliders grew in size and capacity, with space for everything from Parking tickets & sunglasses to CD’s (for while they lasted).

Someone then had the bright idea that if headlamps could be operated automatically, why couldn’t the sun be blocked out without human intervention too. Call it the genius of convenience or sheer laziness, what you will, but that is perhaps, how the idea of an electronic sun-visor was born. Yes, that’s right, someone decided to do a Jetsons on the poor, unsuspecting sun-visor. Sigh! Life I tell you.

Setting aside personal misgivings over the increasing creep of automobile technology in new cars, the said sun visor is a clever and complex piece of tech. Things start to go futuristic real quick from here though, so pay attention. The fine boffins at Volkswagen R&D embedded a sci-fi piece of future tech into the windshield of the car. What it does, is that uses some complex & dark magical piece of engineering & technological wizardry to tint individual portions of the windshield as and when needed.

The electronic sun-visor works in conjunction of twin sensors, with one tracking the position of the sun-rays and the other, tracking the eye position. Some backend computer magic later, voila! The spot where sunrays are at their disturbing best has been cleverly blanked out on the ‘shield. What’s more, the entire system is dynamic, in the sense, that if your eye’s shift, the dark-patch will shift as well. This means, that you’ll never be seen cursing behind the wheel for getting the sun in your eyes again. Clever eh!

Told you it was Jetsons level tech! But then, so have many automotive applications before. They were simply ahead of their time. And who knows, even though it’s been seven years since this thing first came out, 2020 might just see it go mainstream!

A Lowdown On The 10 Rarest Cars On The Planet