One of the richest and highest paid Kollywood actors Vikram is known for his flawless performance and lavish lifestyle. The man has a couple of Audi cars in his parking garage which he likes to travel in whenever and wherever he wants. However, the most talked about among these is his Audi R8, a hot, edgy, and stunning sports car that goes un-missed wherever it goes. The man substituted his Porsche Carrera S with this one a while back. 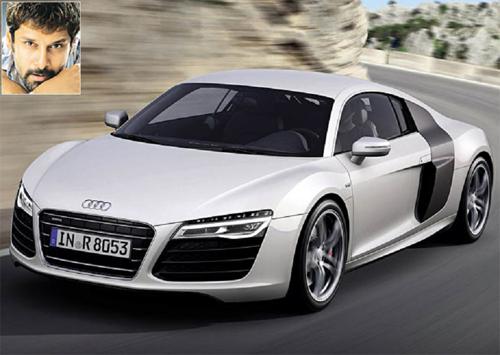 In last one decade, Audi cars have become synonymous for celebrity cars in India. However, there are very few who have cared to go for the most expensive ones and Kollywood actor Vikram happens to be one of them. The handsome dude owns a silver toned Audi R8 that has been remodeled especially for Indian roads. Available at a price range of Rs.77.18 lakhs – Rs. 2.97 crores, R8 happens to be one of the costliest and most striking Audi cars in India. Usually there are premium sports cars and then there is Audi R8. There is virtually no car that can compete with the charisma and magnetism of this car at the moment. There are multiple reasons for which you may appreciate this car but we rate it on highest level for its flawless engineering, incredible aerodynamic design, and usage of lightweight materials.

Audi R8 is known as a legend among luxury sports cars and has been touted as supreme one in terms of driving and handling experience by critics all over the world.  It is a two door coupe and has been created by using Audi’s signatory Quattro along with all-wheel drive system. It is considered as an equivalent to Lamborghini Gallardo. The material used for its make is aluminum monocoque and it was designed by the highly reputed Audi’s Quattro GmbH division. It is offered in four trims and two engine options that vary according to number of cylinders. The first one is a 4.2-litre V8 FSI engine that churns 424bhp against 430Nm torque figure. The other one is a 5.2-litre V10 FSI that yields 517bhp over 530Nm. The coupe effortlessly touches 100kmph speed mark in just 3.6 seconds.

In terms of performance, its handling is taken care by an innovative system that gives a dynamic touch to its driving skills and ensures lower energy consumption. The mileage delivered by this supercar is 4.5-7kmpl over city roads and 8.5-9kmpl over freeways.

The Psychology Behind LED Ambient Lighting Systems In Cars