Mercedes-Benz recently launched the 2015 CLS-Class in the country, which is equipped with the company's new Mercedes MULTIBEAM LED headlights. The newly-announced system features 24 individual LEDs in its high beam that can be controlled electronically. These Multibeam LED headlamps allow the light distribution more tightly controlled, keeping the light focused straight. The entire system is controlled by a camera placed behind the windscreen and four control units, which adjust the brightness pattern up to 100 times per second. 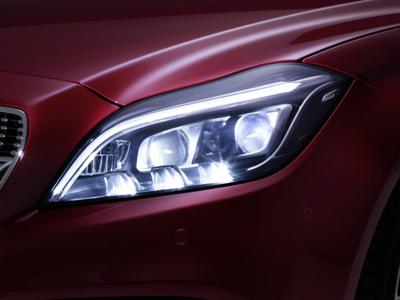 According to the German luxury carmaker, the Multibeam LED setup is good enough to direct light away from oncoming cars and the high beams can stay on. Other four-wheelers are mechanically disguised out of the beam's path to avoid drivers from getting blinded. The company is aiming to further improve this technology by adding more LEDs. According to Stuttgart based carmaker, the headlamps behave like digital cameras, which means more points of lights or pixels result in better illumination. The manufacturer is working on a MULTIBEAM setup which will be equipped with 84 individual LEDs and will have a resolution of 1,024 pixels. This technology will be offered with future Mercedes cars. Higher the individual lighting elements more will be the control without any mechanical activators physically repositioning things.

The German luxury carmaker is also working on a 'High Range' LED high beam that can offer light up to 600 meters. Mercedes claims that such results can be achieved with LEDs at a much cheaper cost compared to the laser headlamps developed by its arch rivals- BMW and Audi. With such new automobile technologies in cars, it is expected that the future Mercedes cars will be safer and technologically advanced.

5 Must Have Car Accessories