The Pros And Cons Of Anti-lock Brakes

Anti-lock Braking System (ABS) mainly aids in having better control over vehicle especially where strong braking is required. Gone is the era when it was counted as a premium safety feature, now it is a standard safety device installed in almost all new cars. Just like traction control, ABS too helps in exerting control over tires on muddy and slippery paths. In their absence, it is likely that the vehicle may start spinning or crash with nearest objects. However, like all other safety systems, anti-lock brakes too bear some pros and cons that need to be considered whenever the idea of buying new car breeds in your mind. For a better understanding, let’s take a look at some primary points: 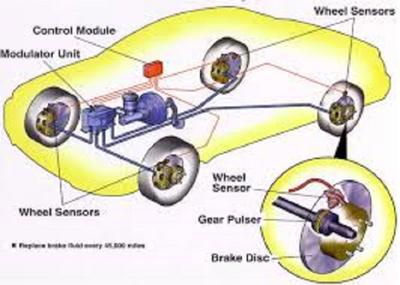 Anti-Slippery – As per all auto guides and experts, ABS saves from skidding and lock-ups over icy roads. This system has been known for saving hundreds of lives by helping drivers in maintaining control over cars.

Lowers Insurance Costs – Since, ABS have proved their mettle in saving lives and enhancing safety level of new cars, insurance companies have known to give special discounts for cars bearing anti-lock brakes.

Better Resale Value – ABS is known for raising not only the safety standards but also its reliability and assurance of safer ride. Therefore, cars laced with ABS bear better resale value.

Inconsistency In Stop Times – It is true that ABS are known for improving braking efficiency over slippery roads, however, some drivers have reported that these interfere with stopping conditions on a regular basis.

Extra Cost – Despite being a mainstream safety feature, ABS have been known for being expensive in terms of maintenance. A slight error in their sensors may cost you thousands of bucks in recovery. It is one of the major reasons why many buyers reconsider buying a new car with ABS.

Safe Driving Tips With Baby On Board

The Importance Of Car Cost Calculators