Mesut Ozil is a young talent who has made his mark in the fast football arena with the likes of Cristiano Ronaldo, Lionel Messi and Steven Gerrard. The footballer was born in the western region of Germany during 15 October 1988 and started playing for the national youth team in his early stages only. The athlete's career has been full of surprises and he has been part of a number of elite clubs of the league. Starting as a senior player for the club of Schalke in Bundesliga, he soon got a transfer to the Werden Bremen Club. Thereafter, he followed the team of Real Madrid owing to his brilliant performance during FIFA World Cup 2014 that even got him nominated for the grant of Golden Ball Award. 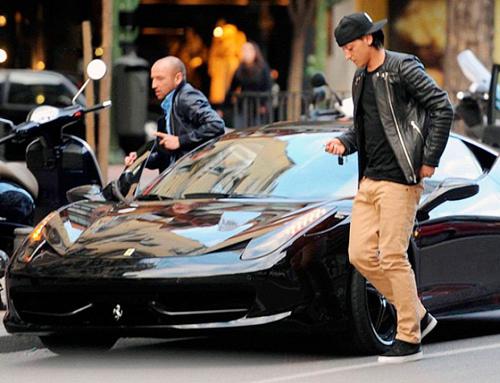 This legendary footballer is mainly acknowledged by billions of fans for his striking finesse and fearsome nature. He is a strong attacker of the ball and can easy pass through the defensive line of the opponents. Furthermore, the star is also acclaimed for assisting the ball to his fellow team-mates; a talent which is often compared to the likes of the great Zinedine Zidane. Ozil has been a top-notch assist for his teams since the past several years and has even been rewarded as the top assists of all time by a number of football authorities. His sheer credibility and clean strikes soon made him get noticed by the giant club Arsenal, which offered him a 5-year contract during 2013 over a sum of an enormous 42.5 Million Pounds. Such an amount has given Ozil the tag of the most expensive German player in the leagues.

Mesut Ozil accounts for an annual salary of a whopping 7.3 Million Pounds and has also signed several endorsements with merchandising giants. He is among the richest footballers the world has ever seen and his lavish way of living justifies the same. He owns a number of real estate properties, vacation beach houses in some of the most exotic locations of the world. Many people may know Ozil as a truly dedicated footballer but he has an equal passion for the hot wheels. Mesut Ozil is the proud owner of a number of cars, among which the most famous are Audi Q7 Luxury Edition and the stunning-looking Ferrari 458 Black Edition. The former is an authentic off-roading machine, which can make its way even through the worst of the roads. On the other hand, the latter is one of the finest creations of the Italian Stallion and bears a hefty tag of $220000.

Apart from these luxuries, most of the life of the athlete is spent either in the fitness room or at the field. At present, Ozil stands up for the Germany National Football Team and Arsenal Club as the midfielder. In the current season of FIFA World Cup 2014, the German team has played superbly and has been able to easily win of all its stage matches. However, there has been no goal struck from the leg of this star player and the vast fan group of Ozil is dearly praying for the same. Germany is being considered among the top contenders of this football championship and will certainly be able to accomplish the same if its players continue their splendid form. The team's coming match is with Algeria and the entire Ozil fan club is praying for the sports person to revive his magic on-field and take his team to the finals.