Imran Khan is a style icon and among the most famed personalities of the Indian film fraternity. The actor is the nephew of the perfectionist Amir Khan but has created his own identity owing to sheer professionalism and superb acting skills. Imran Khan is known for blockbuster flicks, such as Jaane Tu Ya Jaane Na, Mere Brother Ki Dulhan and Delhi Belly. Amidst all the fame and popularity, this youth icon prefers living a simple lifestyle. However when it comes to automobiles, the star has a collection, which depicts a complete different story. The actor owns a variety of luxury cars from the lot of international auto majors but one model, which bewilders the mind of the onlooker, is undoubtedly the Ferrari California. 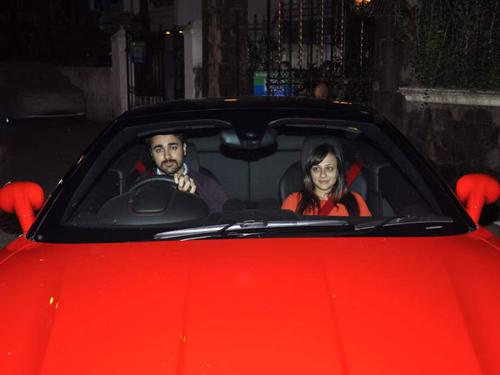 This Ferrari car is certainly one of the most astonishing speed cruisers of the world. The California is among those Ferrari car models, which are created proportionally in terms of aesthetics and performance. Imran Khan's Ferrari California is dipped in a sporty red colour with a matte black retractable hard-top. Sources claim that the actor had asked this Ferrari car to be bespoke and customised according to his preferences. There is only a handful of such stunning looking sports car in India and among them is this model from the Italian Stallion.

Ferrari California is powered by a mammoth 4.3-litre Direct Injection type V8 petrol engine, which is able to churn a power output of a staggering 490 bhp with maximum torque of 506 Nm. This power-packed mill is mated to a 7-speed dual-clutch automatic transmission, which feeds all the energy to the back wheels and enables the car to cross 0-100 kmph mark under 3.8 seconds. This speed cruiser is among the fastest Ferrari car models and has a top speed of a whopping 315 kmph. It is an iconic sports car of India and is owned by a considerable number of famed personalities from all over the world.

The overall chassis of Ferrari California has been carved out of aluminium and the nimble car only weighs around 1.5 tonnes. The company's engineers have put their sheer efforts in creating utmost rigidity in the car even after shedding an impressive 30 kg from the overall proposed layout of this model. California is one of those Ferrari car models, which comprise the best-in-class technologies that govern the entire movement of the vehicle. The trip computer of this speed cruiser allows the driver to easily manoeuvre it on sharp bends with maximum traction even at high speeds.

This Ferrari car bears a hefty price tag of Rs. 4.50 crore – Rs. 5.0 crore over its head. Although it seems costly, experts believe that the implementation of performance-oriented features justify this Ferrari car price. Interestingly, the company accounts for majority of sports car in India, with a number of celebrities owning one in their garages. There are various Ferrari cars in India that belong to the likes of Sachin Tendulkar, Sanjay Dutt and many other famous people. The company has been a top-notch sports car maker of the world for over half a century and still remains in the leading position due to its breathtaking portfolio.